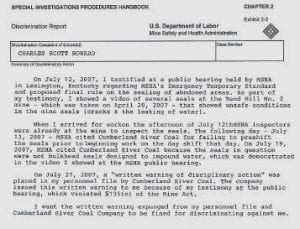 Shown above is a copy of a portion of the discrimination complaint Letcher County coal miner Charles Howard filed with the U.S. Department of Labor.

A Letcher County coal miner claims he has been targeted by the company he works for because he spoke out against unsafe working conditions at one of the company’s mines.

Charles Howard, of Roxana, filed a complaint with the federal Mine Safety and Health Administration last week saying he was being discriminated against by Cumberland River Coal Company, whose office is located in Appalachia, Va.

Howard said he received written warning from the company for potentially creating an unsafe work environment when he made a videotape underground in April.

Howard shared the videotape – which showed unsafe conditions at Band Mill No. 2 mine in Eolia – at a public hearing conducted by MSHA in July. The tape showed leaks and cracks in several seals at the mine.

“It is very rare for a working miner to testify at a public hearing held by MSHA,” said Tony Oppegard, an attorney from Lexington who specializes in mine safety issues. “As I commented at the public hearing on July 12, Scott was risking his job by courageously speaking out about unsafe conditions at his mine.”

MSHA inspected the seals shortly after Howard’s testimony and issued two citations to Cumberland River, one for failing to examine the seals before the day shift began working and another for not using seals designed to impound water.

The complaint against Howard, a beltman and outby fireboss, said he violated company policy by taking photos or video footage of active sites on the company’s property without written consent.

Howard said he is being targeted by the company for speaking out and is asking that the warning be expunged from his personnel file and the company be fined for the alleged discrimination.

“He is probably the only working coal miner in the country who has ever shown a video of his workplace – documenting unsafe conditions – to an MSHA hearing panel,” said Oppegard. “That is why I stated at the public hearing that we considered Scott’s video to be evidence presented to MSHA that is protected by section 105(c) – the Mine Act’s anti-discrimination provision.”

Howard’s complaint said he was working 40 regular hours and 24 overtime hours each week at the time action was taken against him. He receives $20.25 per hour for his work as a beltman and an additional $50 for each shift he works as a fireboss, his complaint says.

Howard’s complaint names Cumberland River Coal Company mine superintendent John Scarbro as the person responsible for the “discriminatory action” taken against him.

Officials at Cumberland River Coal could not be reached for comment.