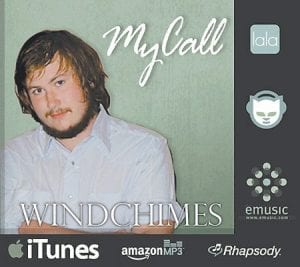 This graphic was designed to promote the release of Mike Hall’s first single, “Windchimes.” Hall, a 20-year-old native of Mayking, is recording an album in Nashville under the name MyCall.

To say that things have been moving pretty quickly for Mike Hall since he left Letcher County for Nashville would be an understatement.

Just four months after he quit his job, packed his belongings and moved to Music City, the 20-yearold folk-rock musician from Mayking signed a contract with Amalie Records to record an album.

The first single from the coming album, “Windchimes,” is now available for purchase on iTunes and Amazon.com. Recording under the name MyCall, Hall, son of June and the late Jim Crit Gose, wrote the lyrics, provided the vocals, played the piano, bass and drums. Mike Daly, from Hank William Jr.’s band, played the pedal steel guitar.

“It’s kind of in it’s own league,” said Hall. “It has a lot of programmed electronic beats. It’s kind of new and interesting. I think that’s why it has gotten so much attention lately.”

Hall, who has been interested in music since he was four, started teaching others how to play the guitar when he was 10. He played in a band called Phusia during his high school days. Kenny Miles, Seth Gover, Hayden Miles ad John Grindstaff also were members of Phusia.

“Things just kind of got weird and life just changed,” said Hall. “I found myself in a job I didn’t like. There’s more to life than working and coming home. So I went to Nashville and tried to make things happen.”

Hall had an unfortunate setback shortly after moving to Music City. To fight boredom one day, he drove to a friend’s house in Nashville. After being away from his vehicle for only about 30 minutes, he was surprised to return to the vehicle and find that thieves had broken a window and stolen all of his instruments and amplifiers. Hall said his mother had called him not knowing he had lost some of his guitars and told him that she had just bought him a new guitar.

“Every day I look in pawn shops for my guitars and amplifiers,” said Hall.

Through a mutual friend, Hall met a representative of Amalie Records and his luck has begun to change.

After touring in November, Hall is scheduled to collaborate in early December with guitarist Matt Hoopes from the Christian rock band Relient K on a track to finish up the full record.

Hall also is finding time to record a Christmas album that will be available on iTunes.

“Things have been going well,” he said.

Hall said his music will eventually be available for sale at Home Town Music and Summit City in Whitesburg.