By DILLION ASHER and LISA BRIGNONI 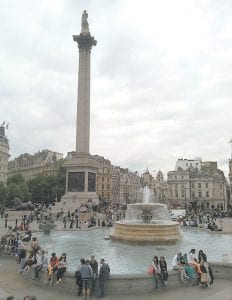 Among the landmarks seen in London by Dillion Asher and his fellow members of Team Innocents Abroad were (above) Trafalger Square and its monument commemorating Admiral Nelson’s victory over a combined Spanish and French invasion fleet during the war of 1812 and (below) Big Ben, the nickname for the great bell of the clock at thre north end of the Palace of Westminster.

Whitesburg native Dillion Asher and two of his friends are participating in a 9,000-mile road rally between the United Kingdom and the Asian country of Mongolia riding in a 061cc Suzuki Alto GL, one of the smallest automobiles manufactured. The rally, expected to take about 40 days to complete, began July 12. Following is an update with photos from Asher and his girlfriend, Lisa Brignoni, who are making the trip with their friend Sledge Simmons. Their rally team is named Team Innocents Abroad.

We arrived at London Gatwick airport on July 2 after a short flight from the Netherlands.

Transportation to the city was incredibly easy — a matter of using a touch screen display to obtain tickets, boarding the correct train and disembarking at the desired station. An escalator brought us up to a bustling street filled with iconic red double-decker buses and classic English taxicabs. Called Regent Street, a local main thoroughfare and shopping destination, it was lined with endless clothing stores and crowded with shoppers and people of all walks of life. Overhead and continuing down the street hung purple banners commemorating Queen Elizabeth’s 65-year reign as monarch of the British Isles. 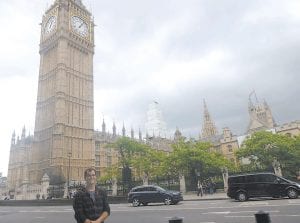 We had a short walk to meet with my cousin, Candace Blair, who has been incredibly kind in offering us a place to stay while we waited to pick up our rally car.

During our visit we walked around London to visit some of the landmarks, such as Trafalgar Square. This huge monument commemorates Admiral Nelson’s victory over a combined Spanish and French invasion fleet during the war of 1812, sparing England from French occupation under Emperor Napoleon. We also visited a free exhibit of the Wallace art collection, where we marveled at the craftsmanship and detail found in paintings, sculptures, furniture, weapons and suits of armor dating as far back as the 1400’s. And of course there was the subway system. Affectionately called “The Tube,” the subway network provides quick and efficient means of transport not just in London but also to the surrounding countryside by overland trains. We’re still in amazement, but were reminded by locals that it is a system under constant strain, requiring a great deal of care and maintenance as it is now 150 years old! 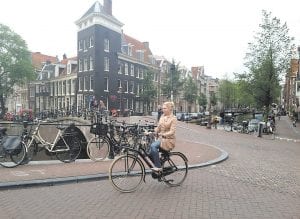 “Bicycles are a very important means of transportation in Amsterdam.” Dillion Asher wrote before leaving London for Mongolia. “The entire city, even most of country, has evolved to incorporate them into its transportation system much as modern America has done with the automobile. The more of the city I observed the more I noticed hundreds, if not thousands of bicycles lining the sidewalks and crowded together in parking areas.”

On July 6 we took subway and rail links to the town of Thames Ditton and walked just a few blocks to the house of Mr. David Leach, who has generously provided storage and safekeeping for our rally car. We planned to camp for the night at Osney Lodge Farm in the town of Godstone, about 17 miles away, and were admittedly nervous about driving for the first time. Unlike the rest of Europe, cars in England use the opposite side of the road, have left-hand gearshifts and steering wheels positioned where the passenger normally sits. Fortunately, and with the help of a GPS navigation system we’d brought along, we were able to negotiate a maze of roundabouts to a quiet country road that brought us to the campsite. 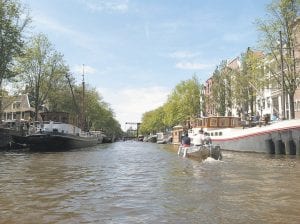 Before leaving Great Britain for the 9,000-mile road rally to Mongolia, the three members of Team Innocents abroad were fortunate enough to be able to visit the Netherlands and the City of Amsterdam, the fourth-busiest port city in Europe. Writes Dillion Asher of the experience: “(Amsterdam) boasts a large network of canals and navigational waterways that have been constructed over the century. We were fortunate enough to have been offered a boat ride in the canals by Sylvia and Ben Owen, taking us from the city center to the nearby Amstel River and back. We slowly passed all manner of personal watercraft, barges and countless houseboats — many of them very old — and an endless parade of old five-story brick buildings resembling the J.H. Frazier building in Whitesburg.

The following day did not go as smoothly, however, as our car broke down on the highway and we had to be towed back to Thames Ditton to wait for repairs. On the bright side we had broken down in England and not in some remote central Asian desert, and according to the Mongol Rally event organizers our team should be in fourth-place for charity fundraising. The good people and businesses of Whitesburg and Hazard have already contributed about $4,500 for the charity Cool Earth, a very big accomplishment!

Our car was repaired as promised and recovered on July 12, just in time for us to make it to the start line at the grounds of Bodiam Castle in southeast England.

Following the morning ceremony on July 14 we started our drive to the port town of Dover and the local ferry terminal, where we boarded the French vessel Rodin bound for the port of Calais. In just over an hour the ferry had crossed the English Channel and we drove out and into the French countryside. There was rolling farmland and the occasional small town or village on the horizon, always marked by some old church steeple or bell tower. Passing through the towns we took note of numerous World War I memorials and also a few English and Canadian cemeteries, as the area near the Ardennes saw considerable fighting in that conflict. Now, however, it is peaceful, and we were also passing through during their Bastille Day celebrations.

The streets were largely deserted and most businesses closed, as the locals were off spending time with their families. We drove late into the evening and crossed into Belgium and the Chimay region. Border crossings in European Union countries are a thing of the past, and now it is just like passing from one county or municipality to another in the U.S. Belgium was our destination for the night as we had a long drive through Germany to the Czech border the next day.

On our way to the Czech Republic on July 15 we passed back into France, through Luxembourg and then on to the high-speed motorways of Germany. We couldn’t possibly keep up, but there were plenty of drivers doing well over 100 mph. We saw more forests in this part of Germany and also vineyards supporting a local wine industry. The architectural style of church steeples and bell towers had changed as well, something that was common as we passed from one country to another and especially if there was a change in language or culture.

Later in the day we made our way back to smaller country roads and finally crossed the Czech border, again without any stops or delays. There was a different language and currency here and we noticed the roads weren’t as well maintained as they had been in France, Belgium, Luxembourg and Germany. That being said, the countryside was still as pleasant as it had been and the little towns continued to remind us of scenes from postcards.

We camped for the night on the grounds of Klenovy Castle in the southwest of the Czech Republic. On the morning of the July 16 we woke early and drove south to Austria, through the outskirts of the city of Vienna and into western Hungary to the town of Magyarovar. Again, we found a completely new language and currency. Hungary was surprisingly flat and covered with what seemed to be continuous farmland. Sunflower fields stretched across the horizon, and it was hot. Roads now lead us straight through the centers of small towns, and we saw our first horse-drawn cart here.

Something we loved about Hungary was that nearly all hotels, restaurants, gas stations, campsites and bathrooms were extremely well marked on even the smallest roads, making them easy to anticipate for travelers. They also love camping here, so we didn’t feel like the only two people crossing Europe by sleeping in a tent.

Dillion Asher is the son of James and Shirley Asher of Whitesburg. The rally in which he is participating is a charitable event. For more information, or to make a donation, please visit www.teaminnocentsabroad.org.