By KED SANDERS and PAUL FLEMING 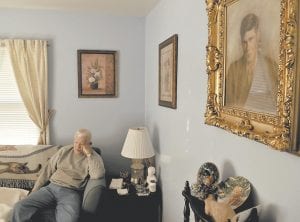 Army veteran Clayton Mullins talked about his brother, James, who died while serving in Korea in 1950. A photo of James hangs at right in Mullins’s living room in Spring Lake, N.C. The brothers grew up in Dunham. (Photo by Marcus Castro/Fayetteville (N.C.) Observer)

When James Curtis Mullins was growing up in Dunham in Letcher County in the 1930s and 1940s, he knew that someday he would probably be a coal miner like his father, Corbett Mullins.

Each day he would see the train of empty coal gons pushed to the head of the narrow valley very close to the back door of their company house at Straight Row. The cars were then dropped into place on various tracks a few hundred yards downstream at the coal preparation plant, where they would be loaded with various sizes of coal from the No. 207 Mine.

Everyone in Dunham worked for Consolidation Coal Company (Consol), or as everyone referred to it, “The Company.” Every home and every facility in the mining community used coal for heating and cooking, and thousands of tons were shipped on the C&O Railroad each day to the industrialized Northern cities.

It had become tradition that most coal miners’ sons would also become miners at an early age, and most miners’ daughters would become miners’ wives. That is the way it had always been since the towns of Jenkins, Burdine, Dunham and McRoberts were established by Consol in 1912. 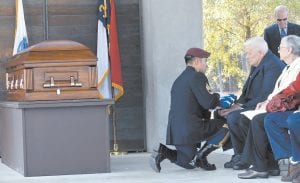 Clayton Mullins was presented with the flag that had covered his brother’s coffin near the end of a military funeral for James Mullins. (Marcus Castro/Fayetteville (N.C.) Observer)

The company provided good schools through grade 12, but there was very little opportunity for most students to further their education. Through the history of the mining community there had been a strong demand for laborers until the industry began to mechanize in the 1940s.

After World War II there was less demand for coal, and in many cases one loading machine would replace 10 hand-loaders. Many young men with no opportunity to advance their education and with fewer jobs available in the underground mines decided to enlist in the military because it was an opportunity to not only earn a paycheck, but also to learn a trade.

Additionally, the military was an opportunity for adventurous young men to see what was on “the other side of the mountain.” James Curtis Mullins was not yet 18 years old when he enlisted in the Army in 1950.

James’s brother, Clayton, had already enlisted in the Army at age 16 and had decided to make it a career. Clayton, a retired master sergeant, now lives in Spring Lake, N.C. He told the Fayetteville (N.C.) Observer the last time he saw his brother was 62 years ago when James was in boot camp at Ft. Jackson, S.C. On that day the elder Mullins, who was assigned to the Ft. Bragg’s 505th Parachute Infantry Regiment, but his brother’s commanding officer allowed them leave the post to eat lunch together. “That was the last time I ever saw him,” Clayton told Observer reporter Greg Barnes.

Clayton and James enjoyed hunting small game while growing up in Dunham. On Saturdays they would go to the movies in the theater upstairs above the old coal tipple and play cowboys and Indians.

Their father, Corbett, was left to raise the boys on his own after their mother, Stella, died of a heart attack on Christmas Eve, 1934. James was just 2-½ years old. Their father later met a widow named Ethel from southwest Virginia, who also had young kids. He got her to come and keep house for him and take care of his two young sons. Corbett and Ethel later married, but did not have any children together.

In June 1950, shortly after he turned 18 and was stationed in Japan, James was ordered to go to South Korea near the beginning of the Korean War. On July 22, 1950, Mullins and his unit, H Company, 2nd Battalion, 35th Infantry Regiment, battled enemy forces near Yugong-ni, South Korea. After the battle, Mullins was listed as missing in action.

In 1951, remains of nine U.S. Army soldiers were recovered from the battlefield near Yugong-ni and were buried as “unknown” in the Pusan Cemetery in Pusan, South Korea. According to the Department of Defense Prisoner of War/Missing Personnel Office in Washington, D.C., the remains of the unknown were reburied at the National Memorial Cemetery of the Pacific in Honolulu, Hawaii — known as the “Punchbowl” — later in 1951.

The Observer reported that Mullins’s remains were recorded as “X-14” and reburied in Section U, Grave 332. The newspaper said the Army never gave up trying to trace Mullins, who wasn’t listed as presumed dead until December 31, 1953.

Earlier this year, analysts from the Department of Defense POW/Missing Personnel Office (DPMO) and Joint POW/MIA Accounting Command (JPAC) reevaluated the information associated with the remains interred in Hawaii and concluded that if exhumed they could likely be identified. Based on available evidence such as metal identification tags, military clothing, and wartime records, analysts confirmed that the remains were a soldier who died at Yugong-ni.

To identify the remains of Mullins, scientists from JPAC used the circumstantial evidence and forensic identification tools including radiograph and dental comparisons.

On November 2, James Mullins was buried with full military honors at Sand Hills State Veterans Cemetery near Ft. Bragg, N.C. During the service, which including a three-volley gun salute and the playing of “Taps,” Army Chaplin Tony Cech told Clayton, “Your brother served this country with great faithfulness and commitment.” At the end, Clayton and Ann Mullins were presented with the flag that had draped the coffin of James Mullins.

“It brings closure to a lot of questions I had in my mind,” Clayton told The Observer. “Where he was. What could possibly have happened to him. It made me happy that they finally identified him, and it made me sad in another way.”

Some friends of the Mullins family from Dunham also attended the funeral, including Paul and Nancy Fleming, who lived beside the Corbett Mullins family, and Jackie and Deana Tackett, who now live in North Carolina. Jackie’s brother, Hershel, also attended.

Officials with the Depart- ment of Defense Prisoner of War/Missing Personnel Office say that more than 83,000 soldiers remain missing from as far back as World War II. Of those, 7,940 fought in the Korean War. Because of advances in technology such as DNA testing, more remains are being identified.