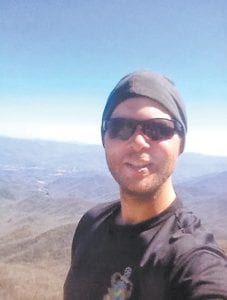 Letcher County native and war veteran Michael Campbell posed for this “selfie” recently along the Appalachian Trail, where he is walking to help himself readjust after three tours in Afghanistan.

A 34-year-old Letcher County native says he is hiking the entire Appalachian National Scenic Trial in an attempt to “walk off ” the war.

Referring to himself as an honorably discharged unemployed veteran, Campbell is trying to adjust back to civilian life, something he says he doesn’t understand.

“Civilians react differently,” wrote Campbell in his blog, www.walkingoffthewar.blogspot.com. “Different worries, different complaints, different reactions. I’ve been able to fake it so far, but I’m quite cognizant of the disparities in my worldview.”

Campbell, a special operations combat medic in the Army, is optimistic that hiking an estimated 2,200 miles through 14 states in four months will help him adapt to life without the structure of the military.

“I never felt like I was hurting before, but these last couple of months while I’ve been on terminal leave have made me aware of differences,” wrote Campbell.

He will spend time praying and reading the Bible during his trek.

“I am also using this trip into the wilderness to come closer to God,” said Campbell. “From the beginning, the Bible is filled with examples of people entering the wilderness for extended times to walk with God, including Adam, Moses, David, John the Baptist, Paul, and even Jesus.”

While his wife Kendra is attending medical school at the University of Kentucky, Campbell has decided to embark on “a rather extraordinary journey” by himself.

“I probably won’t have this opportunity again until I retire from my next career/source of income,” he said. “Stars are aligned, so I’m pulling the trigger.”

It is tradition for hikers of the Appalachian Trail to go by a trail name. Campbell’s trail name is Midnight Sparkle.

Campbell’s friend’s daughter named Alexis likes My Little Pony and told Campbell that if he were a magical flying pony that could talk his name would be Midnight Sparkle.

“She didn’t budge from this and while her parents thought the name more fitting for an exotic dancer, to this day she calls me Midnight Sparkle,” he said. “And so a legend was born or at least a trail name.”

His journey began February 28 in Georgia and he has hiked 300 miles so far. He posted on his blog March 31 while in Tennessee.

He has met other hikers along the way who go by Flex, Greanbean, One Day and Canary.

“He seems to get along with other hikers quite a bit,” said Campbell’s mother, Freda Brown Campbell, of Dryfork.

When Campbell has enough cellphone service, he updates his blog with thoughts about his hiking experiences on the Appalachian Trail.

Freda Campbell checks her son’s blog daily for updates. She said a few days ago he wrote about how he hung his wet clothes up in a shelter to dry and when he woke up the next morning his clothes were frozen.

“He’s had a lot of snow and sleet ever since he has been on the trail,” said Freda Campbell.

Michael Campbell is anticipating finishing hiking the Appalachian Trail in Maine before he begins graduate school at the University of Kentucky in July.