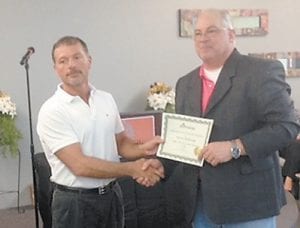 David Holbrook, left, receives his award from Glen Popejoy, president of the Pulaski County Board of Realtors.

Letcher County native David Holbrook was honored recently after being named Salesperson of the Year by the Pulaski County Board of Realtors in Missouri.

Holbrook is broker/owner of Realty Executives Fort Leonard Wood located in St. Robert, Missouri. More than 125 realtors were considered for the award.

In 2013, Holbrook sold more than $12 million in real estate and closed 73 transaction sides. At the start of his career, Holbrook was named Pulaski County Rookie of the Year and has since earned a host of commission- based achievement awards. Holbrook is the son of Corene Holbrook of Mayking and the late Eddie Holbrook, and is married to the former Jennifer Noble of Craft’s Colly.

A graduate of Whitesburg High School, he is a retired Lieutenant Colonel and former Engineer Battalion Commander with more then 22 years of active service as an Army Engineer Officer. He served in Iraq, Kuwait, Saudi Arabia, and Germany. He retired from the Army in 2007 after being selected for the U.S. Army War College.