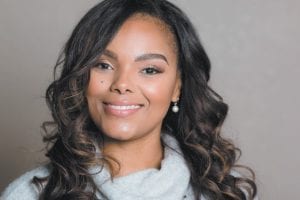 Author Tani Lamb is a granddaughter of the Rev. Willie Lamb of McRoberts.

Lamb will be signing copies of the book on Saturday, December 10, from 10 a.m. to 2 p.m. at the Lillian Webb Public Library in downtown Neon.

Lamb, who was born in McRoberts, knew from an early age that she wanted to “see the world” while traveling outside the mountains with her grandfather, the Reverend Willie Lamb, to various church revivals throughout the region.

“I did get to see a lot outside of eastern Kentucky. So, just seeing all the different cities and states at a young age, I think I knew there was more out there, and I wanted to see that too,” she said. “I will never forget; my mom bought me a set of encyclopedias for my toy room, and I would look through them and see all these places that I could possibly go to one day, or I would image I went there.” 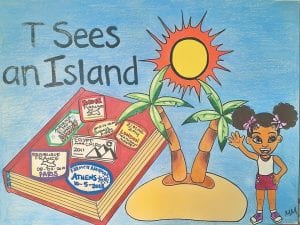 Lamb hopes her book series will inspire other young people to want to see the world. She explains, “Travel is a big part of my life. I’ve been to over 40 countries, and I know how it’s enhanced my life. I wanted to reach out to the little children between the ages of five and nine and show them a little about travel so they might develop an interest for it later in their life, with the hope that it can enrich their life as much as it has mine.”

T Sees an Island is the first of many stops around the globe for Lamb as told and seen through the eyes of her younger self.

“I literally tell the stories through my seven-year-old self who finds her big sister’s magical encyclopedias that take me on wonderful adventures all over the world,” she said.

Each location featured in the book series is a place the author has actually visited. T’s future adventures include trips to Amsterdam, Barcelona, Vienna, Egypt, Jordan and Dubai to name a few. The book also carries the universal lessons of bridging cultural gaps and discovering that people in general are more alike than different.

“What I like most about travel, and what I also highlight in the books, is that people are people everywhere you go,” Lamb said. “I’ve done a lot of trips by myself, and you have to depend on the kindness of strangers a lot of the time. I’ve been lost in places where I couldn’t read the street signs and people have physically walked me from one place to another. I’ve really realized there is kindness in everyone and good people everywhere you go. It has fortified my belief that there are more good people than bad out there.”

Lamb lived in McRoberts until her family moved to Knoxville, Tenn., when she was in the eighth grade. After graduating from Austin East High School in Knoxville, she attended the University of Memphis, where she earned a bachelor’s degree in criminology and criminal justice. She later lived in Minneapolis, Minn., and Miami, Fla., and has made her home in Dallas, Tex., since 2002, where she owns and operates a successful hair salon. She also holds a cosmetology degree from Ogle School of Hair, Skin and Nails in Arlington, Tex.

Lamb, who has visited more than 30 states in the United States, six of the seven continents, and 35 countries, said traveling enables people to experience firsthand the kindness, hospitality, norms and values of other cultures all over the world. She credits the travel as her motivations for writing what will be a series of children’s books, each of which will be titled to contain the phrase, “T” Sees.”

Book number one is entitled, “T” Sees an Island, and opens the lid on Tani’s box of enchanted travels.