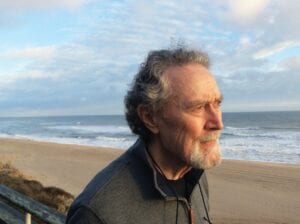 Nelson Robinette “ Robb” Webb, the Whitesburg native who was the voice of CBS’s 60 Minutes and the CBS Evening News for 20 years, died last week in New York City from complications of COVID-19. He was 82.

Beginning in 1997, Robb Webb’s voice introduced CBS’s The Evening News and 60 Minutes to viewers around the globe. According to his daughter, Allison Wilcox, “His unique, warm baritone, laced with hints of the South, also graced serious NFL documentaries and provided many ‘laugh out loud’ interludes on The Late Show with David Letterman. Robb explained his range this way: ‘I can approach (voiceover copy) as a solid newsman or as a dangerous newsman.’”

He narrated John Lurie’s Fishing with John in a tongue-in-cheek style that helped make the series a cult favorite. Lurie called him “the Michael Jordan of narration.”

He provided the voiceovers for thousands of commercials, including the highly entertaining “Get Rid of Cable” ads for DirecTV. The New York Times said, “For many years, Robb’s gentle, humble, avoid-the-spotlight approach to the industry was in sharp contrast to what his voice conveyed to the public. Forever cast as the voice of strength, reason and wisdom, he playfully undermined that genre for years with his profound sense of humor and irony, brilliantly flipping the announcer stereotype that defined him for decades. In satiric campaigns such as DirecTV, Robb toppled the status of the allknowing, archetypal male voice of authority and allowed us to move on.”

Robb Webb died on February 3, 2021, in New York City of complications from COVID. He had turned 82 just five days before.

In the 1970s Webb acted on Broadway with George C. Scott and Jack Gilford in SLY FOX, and Off Broadway at Manhattan Theater Club and Circle Rep. In the 1960s he studied radio and television production for three years at Ohio State University before heading west to begin his career. While serving in the U.S. Army in Asmara, Ethiopia (now Eritrea), he was the station manager for a TV and radio station run by Armed Services Radio and Television. Returning to the U.S.he became a star radio DJ in San Antonio, and a member of the acting company at the Alley Theater in Houston. A skilled photographer as well, he was hired to be the principal photographer for the Alley Theater, and for Hemisfair 1968, the official World’s Fair held in San Antonio. An excellent and meticulous cook, Webb and his wife of 30 years, Pat DeRousie-Webb, were generous hosts in the homes they renovated together in the Catskills and on the Upper West Side.

Nelson Robinette “ Robb” Webb was born on January 29, 1939, at home in Whitesburg, a son of former Letcher County Schools Superintendent Watson C. Webb and Esther June Salling Webb. Although he became a New Yorker to his bones, he retained a love for the Kentucky mountains, co-founding with his poet brother Jim the literary journal Pine Mountain Sand & Gravel, now the official journal of the Southern Appalachian Writers Cooperative. The magazine was named for the quarry on property Jim Webb later purchased atop Pine Mountain. Robb Webb was also an ardent supporter of Appalshop. A consummate professional, widely admired for his work, he was also a loving husband, and doting father and grandfather, a harmonica whiz, a volleyball player, and a man of strong opinions.

Robb Webb is survived by his wife, Pat De Rousie-Webb of New York City, his daughter Allison (Donald) Willcox, grandson Michael Willcox and granddaughter Sara Willcox of Annandale, Virginia. He was preceded in death by his brother, Jim Webb, and his parents, Watson C. Webb and Esther June Salling Webb; and his grandparents Nelson Robinette Webb and Catherine Spangler Webb and Henry William and Lettie Webb Salling. He leaves behind a legion of friends and colleagues.

A family memorial will be planned at a later date. Donations may be made to The Actor’s Fund.