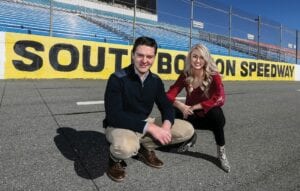 Letcher County native Chase Brashears and his wife Carly pose on the asphalt racing track at South Boston Speedway in Halifax County, Virginia. Mr. Brashears, a graduate of Letcher County Central High School, will serve as assistant general manager through the 2021 season, and will become the speedway’s general manager in 2022. Mrs. Brashears will work as the speedway’s assistant office manager during 2021, and will handle the track’s marketing, sales and administrative functions during the 2022 season.

A talented young husband-wife team with wide-ranging experience in NASCAR racing has joined the South Boston Speedway staff to help lead the historic speedway into the future.

Chase and Carly Brashears will serve as assistant general manager and assistant office manager respectively through the Virginia track’s 2021 season. Chase Brashears, a native of Letcher County, will become the speedway’s general manager in 2022, with his wife, Carly, directing the 10,000-seat track’s marketing, sales and administrative functions.

The Brashears will be working alongside current South Boston Speedway General Manager Cathy Rice and Office Manager Helen Barksdale throughout the 2021 season while learning the speedway’s operations.

A native of Smoot Creek, near Whitesburg, Chase Brashears comes to South Boston Speedway from NASCAR’s competition division where he has served as one of NASCAR’s three national series race directors. After graduating from East Tennessee State University in 2017, he was immediately hired by NASCAR to work in touring and weekly series racing operations, planning marketing events and traveling to grassroots racetracks across North America.

Chase Brashears (left) has been chosen to replace Cathy Rice (center) as the general manager at South Boston Speedway in Virginia. Carly Brashears is on the right.

Kingsport native Carly Brashears comes to South Boston Speedway with a strong background in marketing, sales and digital platforms. She served as a member of NASCAR’s Event Marketing team for the past two years. In that role she was a liaison for NASCAR sanctioned national series tracks, assisting tracks in promoting their event weekends, driver appearances and industry meetings such as driver/crew chief meetings, pre-race festivities and victory lane celebrations.

In 2018-2019 she joined The NASCAR Foundation as coordinator, directing the Foundation’s relaunch of their grassroots racing initiatives and assisting in Foundation marketing initiatives and events. That work included working in a variety of aspects connected with annual humanitarian award processes. Among them were outreach initiatives, website design, social media takeovers and brand management across all mediums.

Prior to that, Mrs. Brashears helped manage social, digital and marketing platforms at Kingsport Speedway and Lonesome Pine Raceway. In 2018 she served as director of marketing and sales at New Smyrna Speedway in New Smyrna Beach, Fla.

“This opportunity came knocking at a perfect time,” said Mrs. Brashears. “We are really excited to be here. Chase and I have always said we want to get back to our short track roots. We’ve been involved in racing for a number of years. It’s in our blood, and we’ve always wanted to get back where it all began, so an opportunity at South Boston Speedway is amazing.”

The couple point out that 2021 will be a learning year, and they are grateful to have Rice to help them learn and transition into leadership roles in 2022. South Boston Speedway CEO Nick Igdalsky said the Brashears are a good fit for the speedway.

“It is rare to find just one person with the experience, reputation and passion needed to oversee a historic racing venue like South Boston Speedway,” Igdalsky pointed out. “We believe we have found not only one, but two, in the husband-and-wife team of Chase and Carly Brashears. “Both Chase and Carly bring with them a tremendous level of racing knowledge and experience from their previous positions with NASCAR and with several nationally known short tracks. The future of South Boston Speedway looks as bright as ever, and I am excited to see how Chase and Carly’s vision takes shape over the next few years.”

“We are very fortunate to have Chase and Carly filling these positions,” Rice said. “I am glad we have somebody that will be stepping in that is younger that can be here for many years.”

“We’ve got the privilege of Cathy sticking around with us for the 2021 season before she slows down,” Mr. Brashears pointed out. “It’s quite a big advantage, and it’s an unusual advantage for somebody in this situation when you’ve got an outgoing individual and an incoming individual in a general manager role. Having Cathy here to walk hand-in-hand with us is going to be quite the advantage because we can use that to learn the community, grow with the community and take Cathy’s contacts hand-in-hand day-by-day and run with that and use all of that. We are not having to write our own playbook, so to speak.”

“And Cathy is still going to be around some in 2022, as she is going to do some consulting work for us,” he added.

“This year is a good year for myself and Chase to step in and see how South Boston Speedway has been run for the past 30-plus years, see where we can fit in and help this year and learn as much as we can,” she said. “This year I will be seeing and learning all of the things Helen Barksdale has seen throughout the years. That is a very heavy load, and I am happy to help lighten her load this year and help where I can.”

South Boston Speedway, also known affectionately as “SoBo” is a historic racetrack and event center located in South Boston, located about 60 miles east of Martinsville, Va., and 291 miles east of Whitesburg. The speedway — owned by Pocono (Penn.) Raceway since 2004 — opened in 1957 as a small dirt track and has undergone numerous transitions through its 60-plus years leading to its current 0.4-mile asphalt oval configuration. The speedway, part of the NASCAR Advance Auto Parts Weekly Series, is a renowned Late Model Stock Car track that also hosts numerous touring series and special events throughout the season.

South Boston Speedway has reached a number of milestones in its 63-year history. The year of 1960 brought the track’s first ever NASCAR Grand National (now known as the NASCAR Cup Series) race. The legendary Junior Johnson won that race held on July 8, 1960 after surviving a hard-fought side by side battle with Ned Jarrett that lasted for 108 laps before Jarrett’s engine blew.

Richard Petty, the heralded king of NASCAR Cup Series racing, has five trophies from the South Boston Speedway tucked away in his trophy cases.