Letcher native will return for concert 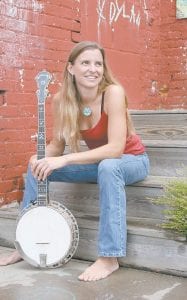 HOMECOMING – Letcher County native Carla Gover is now a highlyacclaimed singer and songwriter, having appeared with artists such as Doc Watson, Jean Ritchie, and Tony Furtado. She will perform in concert at Summit City in Whitesburg on Saturday, March 8.

Award-winning songwriter and Letcher County native Carla Gover will perform in concert on Saturday, March 8, at Summit City in Whitesburg.

Gover’s blend of traditional Appalachian sounds coupled with fresh original song ideas has garnered attention at festivals and contests across the country. A 10-year member of the Americana group Zoe Speaks, she accompanies herself on banjo and guitar, with some clogging thrown in for good measure. She will be joined by Brett Ratliff (on banjo, guitar, and assorted rhythm instruments), who also plays with the Clack Mountain String Band and Daphne Fields, on upright bass. There will be a $5 cover charge for the concert, which begins at 8 p.m.

Persons wishing more information may contact Summit City at 606-633-2715, or by visiting www.summitcitylounge.com.