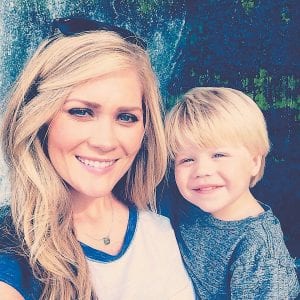 USE SUNSCREEN, STAY OUT OF SUN AND TANNING BEDS is the warning from Letcher native Tawny Dzierzek Willoughby, seen with son Kayden above and showing the results of skin cancer treatment at right.

“If anyone needs a little motivation to not lay in the tanning bed and sun, here ya go,” Willoughby posted on Facebook April 25. “This is what skin cancer treatment can look like. Wear sunscreen and get a spray tan. You only get one skin and you should take care of it. Learn from other people’s mistakes. Don’t let tanning prevent you from seeing your children grow up. That’s my biggest fear now that I have a two-year-old little boy of my own.”

The photo, depicting facial blisters and scabs, was taken April 20 — five weeks into a six-week cream treatment called imiquimod, which is the generic name for Aldara. Willoughby used the immune response modifier to treat patches of scaly skin known as actinic keratosis (AK) located on her face and lips. Imiquimod is also used to treat genital warts and superficial basal cell carcinoma, which is a minor form of skin cancer. 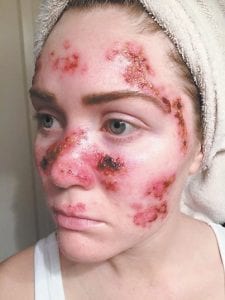 “It causes the immune system to attack precancerous cells,” said Willoughby, who was reared in Isom. “It sounds strange but it’s a good thing. It looks a lot more painful than it actually is. It heals on its own.”

If someone with healthy skin applied the cream, she said, a reaction would not occur.

Willoughby agreed to try the aggressive cream treatment in March after liquid nitrogen was used five times to freeze precancerous cells found on her face.

“I had so many and they kept coming back,” she said.

For the majority of the imiquimod treatment, Willoughby stayed at her home in Killen, Ala., with her two-year-old son Kayden while her husband, Cody, who is general manager of two car dealerships, grocery shopped and ran other errands.

“I didn’t feel comfortable being out much,” said Willoughby, who describes herself as shy.

A few days after Willoughby debuted her photo, she noticed that 67 people had shared her photo on their Facebook pages.

“I was really excited,” said Willoughby.

As of Monday afternoon, her photo has been shared more than 69,000 times on Facebook.

“I’m still happy for people to share it,” she said.

It didn’t take long for national media to find out about her photo. Tawny and Cody Willoughby had planned a relaxing, Internetfree trip to Gatlinburg, Tenn., to celebrate their fourth wedding anniversary. That is when Tawny Willoughby’s phone began ringing often.

“Good Morning America actually came to the cabin,” said Willoughby. “They will find you.”

She also answered questions during a phone interview with a CNN reporter. Within the last week, People Magazine, USA Today, ABC News, Marie Claire, Cosmopolitan, Redbook, Huffington Post, Inquisiter, Buzz Feed, Perez Hilton and Mirror all have mentioned Willoughby and her bout with skin cancer. Willoughby turned down an interview request from The Dr. Ozz Show.

Willoughby said it is worth being in the spotlight to increase skin cancer awareness and promote early detection.

“I want it to be about skin cancer and not about me personally,” she said. “I hope my experience can change at least one life and prevent someone from my fate by encouraging safe sun practices as well as early detection of skin changes.”

Willoughby said she was a frequent tanner because her tan faded fast and she thought she looked pretty with a tan.

“I felt like I was not pretty when pale, she said. “It was a popular thing to do when I was in high school.”

Willoughby wants teenagers to know that they don’t have to tan to be beautiful.

“You are not too young to get skin cancer,” said Willoughby. “If you have spots, get them checked.”

At the age of 21, she was examined by a dermatologist in Alabama after a classmate in nursing school was diagnosed with melanoma.

“There was a spot I was already worried about,” said Willoughby, who was diagnosed with basal cell carcinoma.

In addition to Willoughby’s face, skin cancer has been removed from her back, shoulder and lower leg. She has had basal cell carcinoma five times and squamous cell carcinoma once, excluding her face.

“I go to the dermatologist every six to 12 months and usually have skin cancer removed at each checkup,” said Willoughby.

She checks her skin daily for new growths that could be precancerous.

“If I see a spot coming up I go ahead and schedule an appointment with the dermatologist,” she said.

“We’re pretty proud,” said Raymond Dzierzek, Tawny Willoughby’s father, who is the general manager at Long John Silver’s in Whitesburg. “She wants people to know the dangers. Seeing her face like that was pretty worrisome. She had no idea it would get picked up (by national media). It took off and went crazy.”