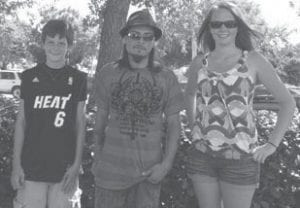 Former Letcher County residents Kenzie Cheyenne Conn and Dalton Wayne Conn have roles in a movie that is being filmed in Homestead, Fla. by Stained Vision Pictures and Masterfl ow Productions.

“LAW DOG 2” is a crime drama based on the experiences of Ed Fields, a retired special agent supervisor with the U.S. Drug Enforcement Administration and former Kentucky State Police trooper and detective.

Kenzie and Dalton play the roles of brother and sister. Kenzie plays a murder victim and ghostly vision and Dalton plays the last person to see her prior to the murder. Movie director and producer Tremain Brown described his stars’ performances as amazing.

Kenzie is 13 years old and is an A student at Rutledge Middle School near Morristown, Tenn. She is a star athlete in basketball and volleyball.

Dalton is 11 years old and an honor roll student at Rutledge Elementary School. Dalton is also a star athlete in baseball and basketball.

Kenzie and Dalton’s parents are Adrian and Daniel Conn. Their grandparents are Ray Fields of London, Pat and Jack Hammock of Whitesburg and John and Alecia Conn of Whitesburg.

Kenzie and Dalton came to Miami with their mother Adrian and grandmother Pat. They spent September 16 in the Everglades looking at the alligators and swimming on Miami Beach. September 17 was spent watching a car stop and kidnapping scene being filmed on the streets of Homestead. On September 18, Dalton was filmed in one scene and Kenzie was filmed in three scenes.

Ed Fields is the son of the late Dolly and Corbin Fields of Whitesburg. His wife Carolyn is the daughter of Louise Holbrook and the late Enoch Oliver Holbrook of Sergent. Both are graduates of the Whitesburg High School Class of 1971. This weekend they will be attending their 40 year class reunion.

Aside from the movie being based on Ed Fields, he will make a cameo appearance as the DEA supervisor for the character DEA Special Agent Ed Fields.

Ed and Carolyn Fields’s son Derrick will play the role of a DEA agent.