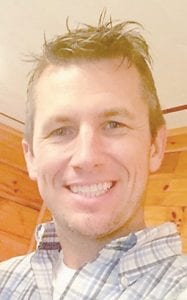 Police have identified a body found near Winchester last Friday as that of a former Letcher County man who went missing after visiting his parents at Crases Branch on July 3.

Authorities said the body, found near Interstate 64, was that of 38-year-old Robert Kevin “Bobby” Jones, who along with his girlfriend, Crystal Warner, 35, went missing after they stopped by a house Jones owned near the town of Springfield. The man renting the home, 52-year-old Craig Pennington, was arrested July 8 and charged with two counts of murder.

The Winchester Sun reported that Jones’s remains were discovered the afternoon of August 5 by four people collecting cans along Goshen Road near U.S. 60 and I-64’s exit 101.

Clark County Sheriff Berl Perdue Jr. told the Winchester paper that the remains were about 20 feet from the road, but at the bottom of an embankment. The couple’s car was found in Scott County in July.

Relatives and friends became concerned about the safety of Jones and Warner after Jones’s parents, Bill and Sandy Jones, didn’t receive the text their son, a father of three boys, had promised to send to let them know he had returned to his home in northern Kentucky. When neither Bobby Jones nor Warner showed up at their jobs with Toyota after the July 4 holiday they were reported missing.

Perdue, the Clark County sheriff, said the investigation was turned over to KSP detectives from the Columbia post. Warner’s body was still missing Tuesday night.

Pennington has been charged with murder, robbery, kidnapping, tampering with physical evidence, theft by unlawful taking of an automobile and wanton endangerment. He is being held in the Marion County Detention Center.

Bill Jones is the pastor of the Letcher Independent Church. His children, Scott Jones, Sam Jones and Becky Isom, have helped lead several unsuccessful searches for the bodies, including at least one in the Winchester area.