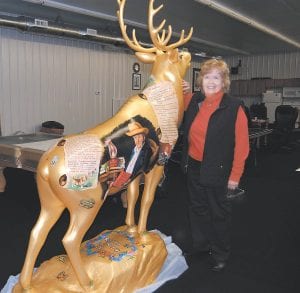 Letcher County artist Anna Daniel Hall stands with a fiberglass elk she has painted to honor the late James Still, an Appalachian author known to many for his classic novel “River of Earth.” The elk will be on display in Hindman. (Photos by Sally Barto)

Letcher County artist Anna Daniel Hall is paying tribute to late Knott County poet, novelist and folklorist James Still by painting his likeness and some of his writings on one of 10 fiberglass elk figures commissioned by the Appalachian Artisan Center in Hindman.

Hall devoted nearly three months to planning and painting the elk, which will be on display in downtown Hindman. The town is the county seat of Knott County, which bills itself as the “Elk Capital of the East.”

Mrs. Hall knew Still, a former Kentucky poet laureate, for several years before he died at age 94 in 2001. Still, born in 1906 and best known for his 1940 novel “River of Earth,” lived next to Mrs. Hall’s great aunt and uncle (Tissie and Mallie Gibson) between Wolfpen Branch and Dead Mare Branch of Little Carr Fork in Knott County.

Mrs. Hall painted a portrait of Still in the 1990’s after Still told her that one of her oil paintings of late Letcher County attorney Harry M. Caudill showed Caudill’s personality in a way he had never noticed before in a portrait. After Still gave Mrs. Hall permission to paint his portrait, she visited Still at his two-story log house and took lots of photographs of him — using up 36 rolls of film to be exact. 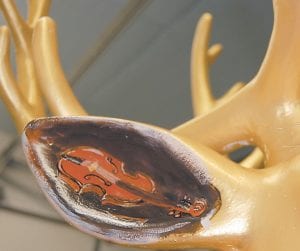 The left ear of the elk painted to honor author James Still features a fiddle painted by Anna Daniel Hall. At right, Mrs. Hall painted the elk’s chest to resemble a plaque honoring Still, who lived in neighboring Knott County for many years until he died at age 94 in 2001. The fiberglass elk painted by Mrs. Hall is one of 10 “Artsy Elk” creations that will be on display in Hindman. The town is the county seat of Knott County, which bills itself as the “Elk Capital of the East.”

Mrs. Hall has recreated her two oil paintings of Still on the large fiberglass elk, which is 75 percent the size of an average elk. Five of Still’s poems —“Heritage,” “Those I Want In Heaven With Me Should There Be Such A Place,” “I Was Born Humble,” “Unemployed Coal Miner” and “Mine Is A Wide Estate” — are strategically placed on the piece with illustrations that compliment the poems. The images include a fox, butterflies, bees and a frog.

At the base of the elk, Mrs. Hall painted the outline of Knott County. A fiddle is painted on one of the elk’s ear and a banjo is in the other ear. A dulcimer can also be found on the statue. 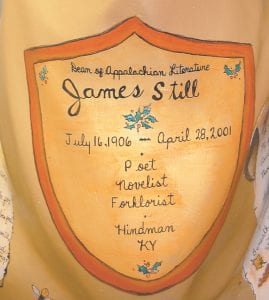 Hall said she covered the elk with four coats of the “world’s best gold acrylic gesso” because it will draw attention. Mrs. Hall drew each image in pencil, then ink, followed by permanent ink and finally acyclic paints.

“River of Earth,” which is required reading in many college literature classes, is about life in the eastern Kentucky coalfields during the Great Depression. The novel, which was called a “work of art” by Time magazine, is often compared with John Steinbeck’s 1939 classic novel “The Grapes of Wrath.” Both novels were published by Viking Press.

Mrs. Hall is a charter member of the Whitesburg Art League and a life member of the Lexington Art League. She has painted two fiberglass horses as part of Lexington’s “Horse Mania” events in 2000 and 2010.

Mrs. Hall’s elk will be on display at the Appalachian Artisan Center.