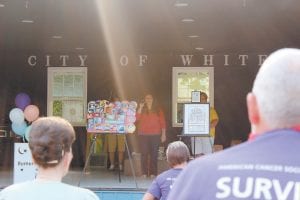 A ray of early evening sunlight shone on a collage of photos of the late Travis Morton during opening ceremonies of the Relay for Life event last Friday. Morton died earlier in the day. (Photo by Debbie Walker-Chapman)

For the fourth year in a row, Letcher County residents have raised more than $100,000 to benefi t the American Cancer Society.

Perry said the number of people involved with Letcher County Relay for Life has increased in recent years.

This is the 16th year Letcher County residents have participated in a Relay for Life event. Money is raised during the year through various fundraisers including bake sales, carwashes and raffles.

After months of fund-raising for Letcher County Relay for Life, 21 teams gathered together at River Park on June 15 to raise cancer awareness, celebrate cancer survivors and remember those who have died from cancer. People set up tents along the track and participated in different activities throughout the night.

In 1985, Gordon Klatt, a colorectal surgeon from Tacoma, Wash., walked around a track at the University of Puget Sound in Tacoma for 24 hours to raise money for the American Cancer Society in honor of his patients. Klatt raised $27,000 by walking about 83 miles with people paying $25 to walk with him. In 1986, Klatt organized a small team of people to walk with him in what was the first Relay For Life event. Now millions of people participate in Relay for Life events in more than 5,000 communities nationwide.

After serving as Letcher County Relay for Life chairperson for the last eight years, Perry is stepping down. She says her love of people and a desire to help people is why she has volunteered with Relay for Life for at least a decade.

“I think that is what I was put on earth to do was make people’s lives a little bit simpler and a little bit less worrisome,” said Perry.

Jeremy Bates, of Isom, will serve as Relay for Life chairperson in 2013.

In addition to it being Perry’s last year as chairperson, Travis Morton, 17, an honorary chairperson, died of cancer the morning of the Relay for Life event.

“It was one of the hardest things I have ever had to do knowing he wouldn’t be a part of it,” said Perry. “The last couple of years he has worked really hard. He loved it so good.”

Perry said Travis would have wanted the event to continue.

At Travis’s visitation on June 17, Rev. Elwood Cornett encouraged those in attendance at Blair Branch Church to donate money in honor of Travis. Perry said the $1,080 donated at the church will be added to the total amount raised in 2012.

“Nobody could raise all the money in the world and do what Travis has done,” said Perry. “He was an inspiration to everyone who came in contact with him. He will truly be missed.”