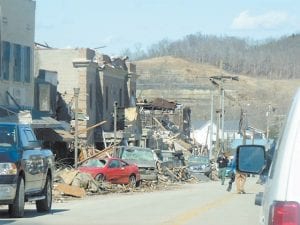 Nicole Rogers took this photo of downtown West Liberty while there volunteering with Letcher Fire and Rescue on Saturday, the day after the second of two tornadoes hit the town.

Residents whose homes and belongings were destroyed by a massive tornado that smashed West Liberty last week were being allowed into town Tuesday, but officials say the area remains hazardous.

The EF-3 twister cut a 60-mile path through the region, killing six people in Morgan County and four more in neighboring Johnson and Lawrence counties. The tornado continued another 35 miles into West Virginia.

Vehicles coming into West Liberty will have to pass through a checkpoint, Kentucky Department of Emergency Management spokesman Buddy Rogers said.

“We don’t want them to overwhelm the community with too much traffic,” Rogers said. He said residents entering town should carpool and avoid unstable debris and damaged buildings .

West Liberty was one of the towns hardest hit by Friday’s tornadoes that killed 22 people in Kentucky. Three more tornadoes cut through the eastern part of the state, and a handful of smaller twisters struck in northern Kentucky on Friday, the weather service said. 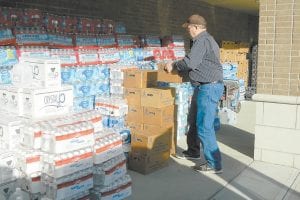 Assistance can include grants for temporary housing and home repairs, lowcost loans to cover uninsured property losses and other forms of recovery assistance.

Banks in the small town opened up temporary locations Tuesday, and were allowing cash withdrawals of up to $500, state officials said.

The city’s main shelter at Morgan Central Elementary was shutting down and moving to the Assembly of Faith church, said Michael Wagers, a county school board employee who has been volunteering at the shelter. Wagers said about 50 people slept at the school Monday night but organizers won’t need as much space going forward.

The shelter has been helping residents with hot meals, showers and a place to sleep, he said.

“These are people who basically came here with nothing,” Wagers said.

Several Letcher County residents headed to West Liberty Saturday morning to pitch in and help those affected by the tornadoes.

“It’s unreal,” said Wallace Bolling Jr., an emergency medical technical with Letcher Fire and Rescue. “I’ve never seen anything like that before in my life.”

Bolling, one of eight people who went with Letcher Fire and Rescue, said he saw cars twisted up on sidewalks.

“Pictures just don’t do it justice,” said Bolling. “There is nothing much left of the town. It reminds you of a third world country. It was unreal to see it live.”

Bolling said many different organizations were in West Liberty helping and there was plenty of manpower on hand.

Members from the Neon Fire Department and Pine Mountain Search and Rescue went to Salyersville.

“ I kept asking myself what are these people going to do,” said Caudill. “Everything is gone. Pictures do no justice. It is one of the most terrible things I have ever seen.”

Caudill said he couldn’t believe what he was seeing when he got out of the truck on Main Street in West Liberty.

“I was dumbfounded,” said Caudill. “It’s going to be years to get it back to some kind of normalcy. They’ll need help for a long time. What can you do? Try to get them basic stuff and pray.”

Millstone Missionary Baptist Church and Larry Wright Trucking are taking water, food, hygiene items and cleaning supplies on Wednesday to affected areas. A truck was parked at Food City on Monday and Walmart on Tuesday collecting donations from community members.

“Helping Hands of the Mountains”, a group led by Letcher County Central High School students Aaron Caudill, Michael Blair and Austin Johnson, is accepting supplies which can be dropped off at the high school or at WXKQ radio station.