Letcher soldier was there 50 years ago 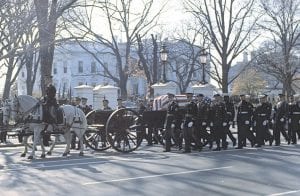 On November 22, 1963, former Letcher County Sheriff Ben B. Taylor, who held the rank of sergeant first class in the Green Berets, was selected to accompany the caisson of President John F. Kennedy, who was assassinated two days before. Taylor is the third soldier seen behind the horse. More coverage of the anniversary of JFK’s death appears inside this issue on Page 5 and Page B1. (AP Photo)