Letcher urged to cut water use; contract awarded for Thornton 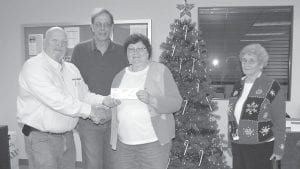 Ferus Inc. base manager Fred Adams (left) presented a $5,000 check to the Letcher County Food Pantry on Dec. 15. Also pictured are Roger McDonald, Geraldine McDonald and Waughletia Little. Adams said this marks the second year the liquid nitrogen plant in Jenkins has contributed to the food pantry during the holiday season.

Letcher County Water and Sewer District customers were asked to voluntarily cut back on water usage this week after a treatment plant in Knott County failed.

Letcher County officials began notifying customers of the need to voluntarily conserve water late Tuesday afternoon. The alert will remain in effect until a new treatment plant at Carr Creek Lake can be repaired. The City of Whitesburg is now the only source of water for customers connected to the county system.

Meanwhile, officials in Knott County were busy trying to determine what caused two pumps to fail at the Carr Fork plant, which has only been in operation for a couple of months. While many Knott County homes have been without water since the weekend, the old Hindman water plant is providing water to customers in that town and the Caney area. Bottled water is being made available at the Carr Creek plant to customers who live in the Redfox area, near the Letcher County line.

A crane was expected to be in place Wednesday morning to lift the faulty pumps out of Carr Creek Lake and replace them with new ones. That process, however, could take several more days to complete.

In a related matter, the Letcher County Water and Sewer District is expected to enter into a $544,063 contract with Akin Construction of Corbin to complete Phase II of the Thornton water project.

Steve Caudill of Bell Engineering told members of the Water and Sewer District’s Board of Directors last week that his company is satisfi ed that Akin, which submitted the low bid, can do the work satisfactorily, even though Bell expects Akin to improve over some earlier work it did for the district.

“We have had a pretty frank discussion with people at Akin over some instances on past projects,” Caudill told the board during its December meeting.

Caudill said an alternative plan to the current bid involves the meters being equipped with radio transmitters that would save time and labor costs on reading meters. He said the transmitterequipped meters will cost $112 each and add $18,032 to the project plus a reading unit that is vehicle-mounted and signals the meter to send its reading to an on-board computer. Caudill said the radio system would cost a total of $52,164, which is still less than the $750,000 of funding allocated for the project.

Caudill also said the Red Star/ Ulvah/Hallie water project is complete and lines are undergoing sterilization and should be ready to service customers soon.

Layout for the Pert Creek/Pine Creek project at Mayking, which for funding purposes includes the Elk Creek project near Blackey, is complete and the project will be ready to advertise for bids as soon as approval is received from the Kentucky Division of Water.