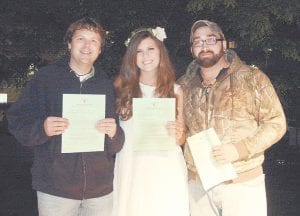 Letcher County resident Taylyn Combs (pictured at center), Logan Hall (left) and Jeremy Dempsey (right) have been selected to advance from the Pikeville semifinals of the “Country Music Highway Road to Fame” contest.

Letcher County resident Taylyn Combs will compete in the finals of the “Country Music Highway Road to Fame” contest sponsored by the state of Kentucky, the Gibson Foundation and several other private and public corporations.

Combs, of Isom, is one of three contestants advancing from the semifinals at the Eastern Kentucky Expo Center in Pikeville on May 10.

“I thank God every day for this opportunity and am blessed beyond words,” said Combs. “I have met not only some of the most talented musicians ever, but some of the best people. I am very grateful for the wisdom I have gathered throughout this competition and win or lose, I know God has a plan for everyone in this. I will be forever thankful for this experience.”

Shelley Young, a Letcher County resident, will be one of 10 competing in the semifinals at the Mountain Arts Center in Prestonsburg at 7:30 p.m. on May 18.

Three semifinalists will also be selected from both Staffordsville and Ashland, which are areas on Country Music Highway.

For making it to the top 12, Combs will receive a Gibson acoustic guitar at the finale on June 16 at the Mountain Arts Center in Prestonsburg.

The “ Road to Fame” competition is searching for the next potential star to come from Kentucky’s famed Country Music Highway (U.S. Highway 23 and roads that connect with it), an area with a vast musical heritage and home to many country stars for decades.

Legendary songwriter and eastern Kentucky native Tom T. Hall, who announced the contest in January with Gov. Steve Beshear, has continued support for the “Road to Fame” competition by announcing the grand prize winner will be invited to write and record an original song in Hall’s private studio on his farm south of Nashville.