Judge Mullins: ‘We want them to get help’ 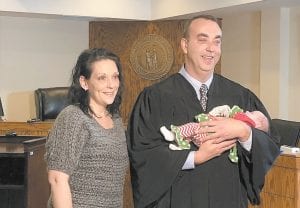 The sound of a gavel banging, and the dramatic clang of cell doors aren’t typically associated with hope.

In this case, the judicial system saved Allison Rose’s life.

On June 28, 2018, Rose found herself facing charges for possessing drug paraphernalia and complicity to traffic methamphetamine in Letcher County. This was not her first drug-related charge. She had several other non-violent crimes and convictions under her name, all related to her struggle with drugs. This arrest was different, though. Rose was approaching her fourth month of pregnancy. Her pregnancy was confirmed in jail and her first ultrasound was performed while she was incarcerated. Luckily for Rose, Letcher District Judge Mullins was presiding over her case.

“I’ve known Allison all of her life. I went to school with her older sister. I know their mother. She comes from a good family. She just, for whatever reason, ended up with this drug problem,” said Mullins. “I was sad for her, but I was also sad for her mother and for her kids.”

Eastern Kentucky is no stranger to the scourge of addiction. Communities across the region are burdened by the economic and social impact of the disease and the effects it has on families. Like many counties across the nation, Letcher County has seen a tremendous rise in drug related crimes in recent years.

According to Judge Mullins, the number of drug related incarcerations has created a serious problem in the county jail, where occupancy has nearly tripled and drastically exceeded allotted bed space.

“We can’t keep doing the same things and expect something to change. It just hasn’t worked,” he said.

Mullins is developing hero status among his constituents. His gavel has represented opportunity for struggling addicts that come before him on the bench.

“I suppose some judges want to appear ‘hard on drugs’ by locking everyone up who has committed a drug-related crime,” he continued. “I think there is a balance. If someone is a non-violent offender, but has a drug problem, it doesn’t make sense to lock them up with no treatment. It’s costly and ineffective. They’ll come right back. There is no harm in showing these people some compassion.”

Mullins has created a network of resources for those facing him in the courtroom on drug-related charges. Tilly Everman, who works at Addiction Recovery Care LLC (ARC), is in the courtroom on a weekly basis to assist addicted candidates to treatment. Everman and her coworker, Michael Clark, both graduates of ARC treatment, applaud Judge Mullins for being integral in changing the culture of the penal system for addicts in Letcher County.

“He gets it,” said Clark. “He knows that these are people with mothers and fathers and kids who care about them. He knows that if they can clean up, they’ll be taxpayers, employees, parents and people who contribute.”

Like many close-knit communities, it’s not uncommon for Mullins to have social familiarity with many of the people he encounters in the courtroom. However, his goal remains the same with all those battling addiction in his courtroom.

Mullins proudly keeps a copy of every certificate of completion from the men and women who he has sent to recovery programs. To date, he has more than 100 certificates in his collection, and he remembers details about many of the individuals represented by each piece of paper. He estimates that the rate of re-offense for those in recovery to be roughly 17% (based on his calculations from the local inmate population) versus the current statistic of 68% for those who have not sought help with recovery.

“It’s really a win-win for us to get these people into treatment,” he said. “There is nothing wrong with trying to help people.”

Rose was offered the opportunity to complete a residential treatment program for expectant and new mothers at Karen’s Place, part of ARC’s extended network of residential facilities, in Lawrence County. Karen’s Place integrates clinical treatment with a faith-based recovery model. According to the website, Karen’s Place is a Commission on Accreditation of Rehabilitation Facilities (CARF) accredited, statelicensed

Rose, who had once before attained sobriety, was struggling tremendously with guilt and shame from her relapse when she arrived at Karen’s Place. The impact of her addiction was felt by many, including her children and her mother.

“My mother thinks she failed me … She didn’t,” Rose said, fighting back tears.

Over time, Rose began to accept her newfound recovery. She started leading groups at Karen’s Place and reestablished communication with her family. Letters from her daughter encouraged her to stay focused on her health and recovery. Mending her relationship with her mother gave her tremendous peace and hope for the future.

On November 20, Allison welcomed daughter Kayleigh Danni-Lynn Rose. Kayleigh was born perfectly healthy, in her mother’s likeness and with no signs of her mother’s former drug abuse. Asked what she attributes Kayleigh’s good health to, Rose answered, “God. This is a miracle. She is a miracle.”

In stark contrast to her booking photos, Rose exudes the glow of new motherhood. The change sobriety has had on her physically pales in comparison to what it has done for her mentally and emotionally.

On December 14, Rose left Karen’s Place and returned to her mother’s home. She was met with tears of joy and relief from her three older children, who are thrilled to celebrate the holidays with their new baby sister.

“If God hadn’t intervened, he [her former partner] would’ve killed me or the drugs would’ve,” said Rose. “I had lost all hope and will to live, the odds were stacked against me.”

With the odds now in her favor, Allison embraces her newfound hope and overwhelming gratitude. “This has enabled me to be the mother my children deserve and the daughter my mother deserves. As long as you still have breath, there’s hope. You deserve a place here on this Earth. You are worth it.”

Source: Shaping Our Appalachian Region (SOAR), a non-partisan economic development agency formed in 20013 to expand job creation and improve the quality of life in eastern Kentucky.