Letcher’s test scores are ‘best’ ever 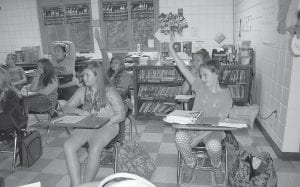 Whitesburg Middle School is labeled as a school of distinction for being among the top four percent of Kentucky middle schools, according to the state’s 2014-15 Unbridled Learning accountability system. Pictured are students Baleigh Ratliff, Olivia Frazier, Celica Loots and Ellie Mullins.

Four schools and the Letcher district are labeled proficient, based on the state’s 2014-15 accountability system data released recently by the Kentucky Department of Education.

“Our test scores are the best they have ever been as far as student achievement is concerned,” Letcher Supt. Tony Sergent said at a luncheon hosted by the district at Pine Mountain Grill on Oct. 1 to announce Unbridled Learning findings.

The Letcher district met its goal and has a 2014- 15 overall score of 68.8. Labeled as a progressing district, it has a percentile ranking of 88.

“We’ve made a lot of strides and a lot of improvements,” said Sergent. “I’m extremely proud of all of our schools and the district as a whole. Two years ago our ranking statewide was in the 29th percentile.”

“That is a great achievement,” said Sergent.

Scoring higher than 96 percent of middle schools statewide, Whitesburg Middle School is labeled a high progress school and a school of distinction, which is the highest honor awarded.

WMS is distinguished with an overall score of 74.4. WMS has scored above the state average in math for five years, said WMS Principal Bart Frazier.

“I’m just so proud of our students,” said Frazier. “Our students and staff work so hard together. We have super high expectations as soon as (students) hit the door and they are eager to meet them.”

Frazier said his staff tries to make sure students have what is needed to succeed.

“The bigger picture here is preparing our kids for life,” said Frazier. “I feel Whitesburg

Middle School is doing that regardless of the scores. It might be making sure they got the latest equipment. It might be they need a jacket. They might even need an extra Pop-Tart.”

Fleming-Neon Middle School is a distinguished school for the second year in a row. Its 2014-15 overall score is 71.2 and FNMS scored higher than 92 percent of middle schools in Kentucky. Last year, FNMS became the first school in the district to reach the highest ranking.

FNMS didn’t have any students to score novice in social studies assessments.

Gracie Maggard, former principal at FNMS, said teachers stayed after school to help students who were struggling in content areas.

“Our teachers there expect the best,” said Maggard.

Cowan Middle School obtained distinguished status with an overall score of 72.1. The high performing school ranks in the 94th percentile and is labeled as a progressing school.

“We’re extremely proud of these young men and women,” said Cowan Principal William J. Mike. “It has taken a team effort to reach these heights. Our school is truly united in one common goal — to make every student the absolute best they can be.”

Arlie Boggs Middle School has a percentile ranking of 71 and an overall score of 66.1.

With an overall score of 72.7, LCCHS scored better than 78 percent of Kentucky high schools. The high school is labeled as progressing.

WWES is progressing with an overall score of 69.7 and a percentile ranking of 80.

“As a school principal, raising test scores is naturally the top of our to-do list,” said LES Principal Wendy Madden-Rutherford. “It’s something we all want to see. That’s our measuring stick. Nobody wants to have their school labeled as one which needs improvement. is where we stand today.”

With an overall score of 64, ABES ranks in the 56 percentile. The Eolia school met its goal and is progressing.

Cowan Elementary scored 59.5 overall and has a percentile ranking of 36.

“It is only a matter of time before our scores catch up with our efforts,” said Mike.

Letcher Elementary ranks in the 46th percentile with an overall score of 61.9.

“We were a proficient school last year and we were really kind of surprised we closed the gaps enough to get there,” said Madden- Rufferford. “We also knew that would be very difficult to maintain in terms of the challenges that we were faced with.

“We believe good teaching is good teaching. We have good teachers and great people in our school.” Letcher Middle School has an overall score of 61 and a percentile ranking of 49.

“What we are targeting this year is novice reduction,” said Letcher Middle School Principal Rick Warf. “We do all these things to get kids moved up to the proficient and distinguished categories, but we just had way too many novices last year.”