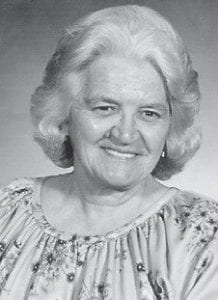 Born in Letcher County, she was a daughter of the late David and Martha Brown Hall. She was married to the late Joe Henry Polly, and after his death married the late Arland Everidge.

She retired at the age of 80 from her job as a waitress at Shawnee Lanes Bowling Alley.

Funeral services were held November 26. Burial was in the Concord Church Cemetery.