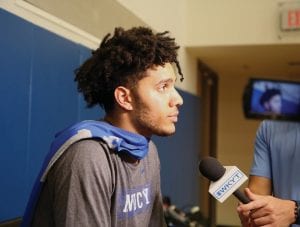 Dontaie Allen’s high school coach says the Kentucky freshman believes he can hold his own at Kentucky and in the SEC going forward. (Vicky Graff Photo)

He didn’t get a chance to play in a game but that doesn’t mean Dontaie Allen was unhappy with his freshman season at Kentucky under John Calipari.

“He said it was a great learning experience,” said Keaton Belcher, Allen’s coach at Pendleton County.

Allen was leading the state in scoring his high school senior season when he injured his knee in late December. Belcher actually thought he might be ready for the second half of his freshman season at Kentucky but once he was ready to play late in the season Calipari didn’t want to throw away a year of eligibility for very limited playing time.

“Talk about patience. The biggest love of his life in basketball and he had to sit out a season and a half,” Belcher said. “That can make you go crazy. But he’s so strong-minded and such a great teammate that he knows the best is yet to come.”

Belcher says positives for Allen are that he already has a year of classes, has learned more about strength and conditioning than ever before, and had great learning experiences while just watching.

“He saw everything from the bench from being in Madison Square Garden when they beat the No. 1 team (Michigan State) to losing to Evansville at home,” Belcher said. “It was a great overall learning experience. He saw the high and lows of a really good season. So despite not playing, he learned a lot. He got a whole different perspective on basketball that can only help him.”

Calipari said once Allen was able to practice enough to learn plays, spacing, press attacks and more he could have helped the Cats.

“He could have gone in the game and held his own. I’m excited for him coming back and I think he’s excited,” Calipari said.

Allen told Belcher he was included in individual instruction and at times played in team scrimmages.

“I think he believes when he is fully healthy he can hold his own at Kentucky and the SEC,” Belcher said. “His work ethic will make sure he is in the mix (for playing time) next year. He has the best work ethic I have seen. He will be fine competing and holding his own next year.”

Allen, last year’s Mr. Basketball in Kentucky, has been back in Falmouth with his parents since UK students had to leave campus because of the coronavirus. Belcher said Allen has been working out on his own at his backyard court and has found an inside court to shoot on occasionally.

Two of Allen’s freshman teammates, Kahlil Whitney and Johnny Juzang, no longer are on the team. Whitney left the team in January and Juzang decided to transfer after the season ended. That won’t be a problem with Allen.

“ Dontaie is at his dream school,” Belcher said. “It took him about 30 seconds to say yes to Cal when he was offered a scholarship. He was practicing every day and in the program he wanted to play for. He is going to embrace it every year he is there. He’s a very happy, go-lucky kid and is excited to be at Kentucky. Just think of all he got to see and learn last year. Now he knows more about what to expect next year and really can’t wait to show what he can do.”

As it gets closer to his May 10 commitment, Frederick Douglass receiver Dekel Crowdus admits it is “hard cutting people off ” that have been recruiting him.

The 5-11, 165-pound Crowdus is one of the nation’s elite recruits and cut his list to 10 schools — Kentucky, Louisville, Oklahoma, Ohio State, Texas, South Carolina, Virginia Tech, Baylor, Michigan and Mississippi — in mid-March.

His decision process has also been complicated by the COVID 19 outbreak that basically brought recruiting to a halt.

“I can talk to coaches on the phone but no visits,” he said. “I’ve got my mom helping me and my cousin (Chase Minniefield) who played NFL ball. I just want to go somewhere the head coach likes you the most and where you know you are going to shine and ball out.”

With Crowdus’s speed and other abilities, he likely will “shine” no matter where he picks. He’s been hand timed in 4.36 seconds in the 40-yard dash and 4.45 laser timed.

“I have been lifting, running on my own since schools were closed. It’s easy to do that,” he said. “I will put in the work. That’s why I know I can shine wherever I go.”

He’s ranked as the second best player in Kentucky in the 2021 recruiting class behind only his teammate, offensive lineman Jager Burton, and is one of the nation’s top 50 receivers. He played last season at IMG Academy in Florida before returning to Lexington to play the 2020 season with Frederick Douglass again.

He said his time in Florida on his own helped him mature and the practice competition “was to the max” daily.

“The competition was really great in games, too,” he said. “No playing around. Full speed all the time. You could not get caught slacking or you would get embarrassed. It was way better competition than here in Kentucky but I am hyped to be back with my boys. I hope we can win a (state) championship and ball out.”

Isaac DeGregorio doesn’t have unrealistic expectations about being part of the Kentucky basketball program but he does know about playing point guard. He averaged 17.3 points per game for North Catholic (Penn.) and helped his team go 26-2, including winning the WPIAL Class 3A championship.

He decided to join John Calipari’s program as a preferred walkon. DeGregorio’s grandfather, Joe, was Calipari’s college coach at Clarion.

“I shoot the ball well and like to get teammates involved,” Isaac DeGregorio said. “I am a pass-first point guard. I can shoot the 3 and get to the hoop, but my team had four players average in double figures. I like to get the ball to other guys to score.”

North Catholic’s season was suspended by the coronavirus after it won its district championship and had advanced to the state quarterfinals.

In the first two rounds of the playoffs, DeGregorio scored 33 and 25. In the WPIAL championship, he made 19 points and went 10-for-10 at the foul line.

She was named the Southeastern Conference Player of the Year, became the first UK player to earn Associated Press first-team All-America honors. She was also named an All-American by the U.S. Basketball Writers Association and the Wooden Award. She was also one of five finalists for the Wooden Award, Citizen Naismith Trophy, Ann Meyers Drysdale Award and Cheryl Miller Award — the nation’s most prestigious awards. She even made the all-SEC defensive team.

Carolyn Peck, a former UK assistant coach, was a bit puzzled by Howard’s slight, too. She certainly knows her basketball as she won the 1999 national championship coaching Purdue and is now an analyst for ESPN and the SEC Network. Peck wondered how the only Power 5 player in the top five nationally in scoring and “one of the toughest players” to guard didn’t merit All-American honors.

“She would be a top 5 draft pick, this year, and she is a sophomore. HOW DOES THIS HAPPEN?” Peck posted on Twitter.

Even Kentucky softball coach Rachel Lawson, an avid fan of all UK sports, got into the second-guessing.

“Things I’ve learned the last two days that make no sense to me: 1. When cooking, there’s a difference between dry & liquid measuring cups. 2. There’s an actual man named Joe Exotic who ran for the presidency. 3. You can somehow be voted SEC POY (Player of the Year) but not All-American,” Lawson posted on Twitter.

However, what magnifies the injustice here is that UK coach Matthew Mitchell went on a Twitter rant over Howard’s exclusion from the team. Remember 10 coaches picked the team and coaches almost never criticize other coaches. This time, though, Mitchell felt he had to defend his player who he noted “IS an All- American” and he’s right.

“To the outside observer, the fact Rhyne Howard was not considered one of the 10 best players in America this past season, is shocking,” Mitchell said while noting two SEC players made the team while Howard, the SEC Player of the Year in voting by league coaches, did not.

Michigan commit Isaiah Todd, one of the nation’s top 20 seniors, recalled having Wall come back to the tournament named in his honor this season.

“He came to see us, worked out in the gym with us,” Todd said when he was in Kentucky to play last season. “I got to see him work out and after the game we talked briefly. That’s my guy. He reaches out on Instagram all the time to help us.”

Todd admits he grew up watching Wall play at Kentucky and still remembers the first time he paid attention to Wall.

“I always knew who John Wall was. First time I heard about him was when that (John Wall) dance came out (from Big Blue Madness),” Todd said. “When I moved to North Carolina and was looking for a school to go to is when I took a deep dive into who he was and looked at his life. He’s pretty amazing.

“We love seeing John in the gym. One of his former teammates is now our assistant coach, so we get the extra stories, behind the scenes stuff about John that is pretty cool.”

Todd certainly sounds like he will be a Wall fan for life for more than Wall’s basketball skills.

“I would definitely reach out to John for anything. He’s a wonderful person. He’s just a great guy. Regardless of what he is going through he is reaching out for his guys and tells us never to hesitate to reach out to him,” Todd said.

Quote of the Week: “It’s doing the things necessary that you can with the program. It’s also important to help the community as best you can, reach out and help people the best you can. I’m like most of us, going a bit stir crazy. It’s difficult, it’s a difficult time for a lot of people, and doing the best I can,” UK coach Mark Stoops on how he’s spending his time.