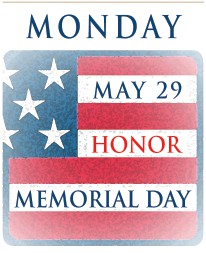 Memorial Day was originally known as Decoration Day, was borne out of the Civil War and desire to honor our dead. It was officially proclaimed on May 5, 1868 by General John Logan, national commander of the Grand Army of the Republic, in his General Order No. 11.

“The 30th of May 1868, is designated for the purpose of strewing with flowers, or otherwise decorating the graves of comrades who died in the defense of their country during the late rebellion, and whose bodies now lie in almost every city, village and hamlet churchyard in the land,” Logan proclaimed. The date of Decoration Day, as he called it, was chosen because it wasn’t the anniversary of any particular battle.

On the first Decoration Day, General James Garland made a speech at Arlington National Cemetery and 5,000 participants decorated the graves of the 20,000 Union and Confederate soldiers buried there.

After World War I, Decoration Day it was extended to include all men and women who died in any war or military action.

The current name Memorial Day did not come into use until after World War II.

Decoration Day and then Memorial Day used to be held on May 30, regardless of the day of the week, on which it fell. In 1968, the Uniform Holiday Bill was passed as part of a move to use federal holidays to create three-day weekends. This means that since 1971, the Memorial Day holiday has been officially observed on the last Monday in May.

At dawn on Memorial Day, the flag of the United States is raised briskly to the top of the staff and then solemnly lowered to the halfstaff position, where it remains only until noon. It is then raised to full-staff for the reminder of the day. The half-staff position remembers the more than one million men and women who gave their lives in service their country. At noon, their memory is raised by the living who resolve not to let their sacrifice be in vain, but to rise up in their stead and continue the fight for liberty and justice for all.

The “National Moment of Remembrance” resolution was passed December 2000. It asks that at 3 p.m. local time all Americans voluntarily and informally observe in their own way a Moment of Remembrance and respect, pausing from whatever they are doing for a moment of silence or listening to “Taps.”

In addition to decorating graves, many of us attend one of the thousands of parades held on Memorial Day in large and small cities all over the country. Most of these feature marching bands and an overall military theme with National Guard and other servicemen and women participating along with veterans and military vehicles from various wars.

Regardless of where or how you plan to spend your Memorial Day, don’t forget the true meaning behind the day — a day to remember those military men and women who died while serving in our armed forces regardless of the conflict.