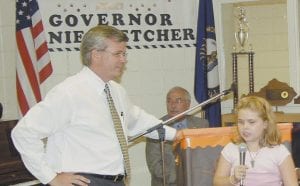 GETS NEW COMPUTER – Melissa Baker, a student in third grade at Burdine Elementary School, thanks Governor Ernie Fletcher (left) after Fletcher presented her with a rebuilt computer during a ceremony in Whitesburg last week. Seated behind Baker and Fletcher is Whitesburg Mayor James W. Craft. (Photo by Sally Barto)

Melissa Baker, a third-grader at Burdine Elementary School, dreamed of owning her own computer and Fletcher made that dream a reality on September 12.

In April, nine-year-old Melissa sent the governor a handwritten letter asking for a computer. In her letter,

Melissa explained that she and her mother, Michelle Baker, were in an automobile accident in 2000 which has kept her mother from working.

Melissa wrote to the governor asking for help at the suggestion of her mother.

“It kind of tears at your you see a young person this day and age that’s not able to have the basic tools that you need for education really to be prepared for the 21st Century workplace,” said Fletcher.

This was the first letter the governor has received from a child literally asking him to provide her with a computer.

“We get a lot of letters from young folks, but one where you can actually come and help immediately is one of the more rewarding times in this job,” said Gov. Fletcher.

Melissa’s former teacher, Sonya Fugate, said she wasn’t surprised to hear that Melissa had written a letter to Fletcher.

“If there is a problem, she is definitely the one that is going to solve it,” said Fugate. “Melissa is a very enthusiastic little girl and a curious learner.”

Trisha Lawrence, the assistant to the president of ConnectKentucky, helped Melissa get a refurbished computer updated with the latest software. ConnectKentucky is an initiative to strengthen technology throughout the commonwealth.

Lawrence said there is a program called No Child Left Offline which provides eighth-grade students with refurbished computers. Although Melissa is too young to qualify for a computer under this program, Lawrence found an extra computer to accommodate her.

“That is the biggest gift I brought (to Letcher County),” said Fletcher. “It wasn’t the most expensive, but to see Melissa Baker’s eyes light up when she got that computer, it really was the best part of the day.”

Burdine Elementary School is part of the Jenkins Independent School District. The presentation was made while Fletcher was attending a ceremony at Whitesburg Middle School.