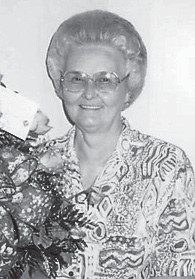 A daughter of the late Alvin and Mary Franklin Hall, she was the widow of Argene Day. She was also preceded in death by four brothers, Harvey Hall, James Hall, Ed Hall, and Joseph Hall, and three sisters, Bea Nelson, Evelyn Holbrook, and Opal Holbrook.