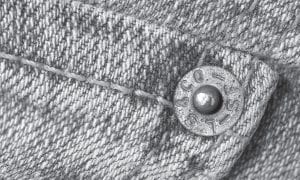 On May 20, 1873, Levi Strauss of San Francisco teamed with Reno, Nevado tailor Jacob Davis to secure patents for canvas pants with copper rivets. Strauss, who began selling canvas pants to miners in 1850, received a letter from Davis in 1872 in which Davis told him the seams of the canvas pants could be strengthened with the copper rivets and asked Strauss for help in securing the needed patents. In return, Strauss made Davis his production manager. Levi’s jeans are now made of denim but still use copper rivets. (AP Photo)

Thursday, May 24, 1945 Letcher County residents are being asked buy 166,000 “E” series War Bonds at a total cost of $500,000 as the costly war continues in Japan and the three million U.S. soldiers remain in Europe despite the surrender of Germany.

. The Jenkins area has accepted the responsibility of its residents purchasing $100,000 of Letcher County’s quota of $500,000 Series “E” War Bonds.

. The City of Whitesburg has set a goal of increasing its tourist trade 100 percent in the coming postwar years. Says The Mountain Eagle in touting the city’s goal: “Whitesburg is not a perfect city. There is no perfect city. But when the perfect city is evolved there is no reason why Whitesburg should not be that city. Perfection is not merely a matter of population.”

. The body of Ray W. Arms, 54, was found in the Daniel Boone Hotel last Friday morning. A former resident of New York City, Arms came to Letcher County two years ago to work as a mining engineer. A former professor at Ohio University, he quickly became well liked here, where he was a volunteer instructor of the Whitesburg Choral Club. Arms’s remains were taken to Columbus, Ohio, for cremation. His wife, Marie Arms, and two daughters, all of New York, survive him. 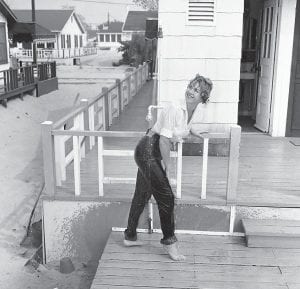 This 1959 photo shows Broadway actress Theda Nelson demonstrating the recommended way to get Levi’s to shrink to size: put them on and get them wet, just as she was doing here in San Francisco, Calif. The procedure is one that was followed for years. At the time, Levi Strauss & Co. said that when Theda came in from the shower and dried off her jeans shrank an inch around the waist. The jeans also faded to a lighter blue. The first pair was sewn from sailcloth in 1850 by Levi Strauss for a California miner who complained that available pants were too flimsy for his work. Now, of course, casual living has helped keep Levi’s popular throughout the nation and much of the world. (AP Photo)

. Private First Class Bill Calihan, 28, of Roxana, is now a patient in an Army hospital in Walla Walla, Washington, where he is recovering from wounds he suffered in battle in Saint-Lo, France, on June 21, 1944. He also fought in the D-Day invasion of France on June 6, 1944.

. U.S. Marines Private First Class Lawrence Nease and Navy Storekeeper Third Class Leonard Nease, sons of Jasper and Virgie Nease of Colson, were fortunate to be home together recently while on furlough. Lawrence has seen action in both Guam and Iwo Jima, where was wounded while serving with a demolition squadron. 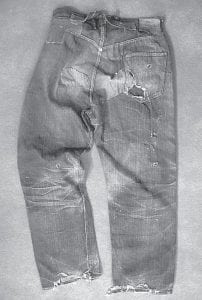 . U.S. Army Private First Class James F. Niece, 33, of Whitesburg is recovering in an Army hospital in England after being wounded by shrapnel while fighting in Luxembourg.

. Staff Sergeant Wilce Coots, 23, of Eolia, has returned to the U.S. after serving four months as a section chief in the European theater of operations. He is a recipient of the Purple Heart for wounds received in combat against the enemy and the European campaign ribbon with two battle stars.

. The Letcher County Coal & Improvement Company of Whitesburg has announced it is going out of business. The announcement comes from company vice president M.D. Lewis.

. The War Mothers Bible Class of Whitesburg held its quarterly meeting at the home of Mrs. Watson Mullins of Sandlick. More than 25 mothers attended. 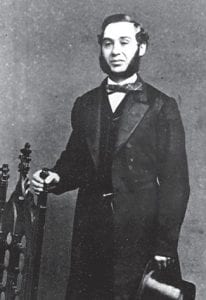 Levi Strauss in the 1850’s. Strauss emigrated from Bavaria with his family to New York City in 1847. (AP Photo)

Thursday, May 19, 1955 With all dogs required to have a rabies vaccination by July 1, the Letcher County Health Department is sponsoring rabies clinics across the county next week, May 23-27. Dog owners are responsible for the cost of all treatments should his or her dog become rabid and bite someone. Three-year serum will be used at a cost of $1.50 per dog.

. The Letcher County Health Department says that all 1,698 persons in Letcher County who were given the first Salk polio vaccine will be notified when the second vaccine is available. The local health department also wants to make it clear that no cases of polio have developed as a result of the vaccination nor have any major reactions been reported.

. Whitesburg insurance agent Estill Blair has announced his candidacy for the office of state senator on the Republican ticket. Blair made the statement as he was leaving for vacation in Florida. He said he will make a formal announcement upon his return sometime in the next two weeks.

. Forty-nine high school students and 40 eighth-grade students graduated during ceremonies held Tuesday morning, May 17, at Stuart Robinson High School near Blackey. Gurney Norman, senior class president, presented the gift of the class to the school — a gift of $100 to buy hymnbooks. The school’s principal is Jack M. Burkich.

. An increase of 150 percent in coal consumption by the electric utility industry is forecast by 1970, even after allowances for increased efficiency in use. In 1920, for instance, it took three pounds of coal to produce one kilowatt of electricity. Today, only one pound or less is required to do the same job.

. Mrs. Willard Rudd and son, David, were home for a few days’ visit in Seco with her mother, Mrs. Tom Terry.

Thursday, May 20, 1965 U.S. Senator John Sherman Cooper said in a telegram to The Mountain Eagle this week he shares the concern of eastern Kentucky residents over failure of the Appalachian Regional Commission to include renovation of U.S. 119 in its early road program.

. Letcher County Attorney Stanley Hogg is resigning his office in early June so he can join his wife and two daughters in Korea, where they have been the past two months. Whitesburg attorney John Cornett is expected to be Hogg’s successor.

. Because of the large number of candidates for Letcher County offices in the primary election, the ballot is somewhat more complicated that usual. The Democratic candidates are spread across the first three columns of the

voting machine, and the Republicans across the next two. Voters will have to use care to be sure they pull the proper levers by the named of the candidates of their choice.

. More that 400 Letcher County five-year-olds will attend classes this summer under “Operation Head Start”, a program of the War on Poverty designed to get them ready to start first grade in the fall.

. Four Whitesburg students were injured in the crash of an automobile and a highway department high-lift near the state highway garage at Mayking. The car was driven by Bernetta Holbrook, 17, of Thornton, a senior at Whitesburg High School. Passengers in the auto were grade school pupils — Debbi York, Terry York and Randall Baker, all 10 years old and from Thornton as well. The wreck happened as the high-lift made a left turn off the U.S. 119 and into the highway garage driveway while Miss Holbrook was attempting to pass other vehicles while she and her three passengers were returning home after school. She was not exceeding the speed limit, but the brakes on her vehicle were not working properly, skid marks indicate.

. Randall Bentley, son of Mr. and Mrs. Zenneth Bentley, was notified that a poem, “Muse’s Gift”, written by him is include in the May 1965 issue of the National Beta Club Journal. The magazine, publication of the national Beta Club, a high school honor society, uses one poem a month. Bentley is a senior at Whitesburg High School.

Thursday, May 22, 1975 Two men were killed and hundreds left homeless when Elkhorn, Beefhide and Shelby creeks — swollen by four inches of rain in less than four hours — overflowed their banks in the worst flooding since 1957. Damage estimates ranged well above one million dollars. Estill Newsome, 31, of Burdine, and Charles Edward Slone, 60, of Dandridge, Tenn., died in separate accidents when their vehicles were swept into floodwaters.

. ”Surely a mountain family should be able to live in its home in peace, free from fear that boulders will come smashing through the ceiling from a strip mine, or that the house will be pushed from its foundations,” says a Mountain Eagle editorial. “And surely a miner’s family should be able to think that some minimum standards of safety are being met even if the miner is two miles underground. Apparently, however, the coalfields in eastern Kentucky have gone back to the days when all rights are reserved for the coal operator, and the coal miner and his family are pieces of property to be dealt with as the operator deems best.”

Wednesday, May 29, 1985 William Edward Pennington was sentenced to a life term in prison without being eligible for parole for at least 25 years for murdering his mother-in-law in August 1984. Pennington was convicted of murdering Juanita Banks Hatton and attempting to murder his wife, Sharon Pennington, and her aunt, Hazel Hart. He was also convicted of first degree burglary, and breaking into the home of

. Heavy rains dampened the spirits somewhat at Ralph Stanley’s Memorial Bluegrass Festival at Roxana. However a little sunshine and the Father of Bluegrass himself, Bill Monroe, combined to bring thousands to the festival and ensure it was a success.

. Darla Engle and Beth Hall are valedictorians of the Fleming-Neon High School Class of 1985.

Wednesday, May 24, 1995 Two Whitesburg attorneys, Peyton Reynolds and Edison Banks, say they will lead a court challenge of Kentucky Education Commissioner Thomas Boysen’s decision to suspend the five members of the Letcher County Board of Education. The attorneys said they would first challenge Boysen’s action in the state court system, and if they lose there file a lawsuit against Boysen in federal court.

. Mountain Eagle columnist Ike Adams reports that of 74 pieces of “fan mail” he received in a two-month period, 73 of them came from women. He says, “The letters are most often kind and soothing and they often put me in my place.”

. Sarah Joseph is valedictorian of the 1995 graduating class at Letcher High School. Rebecca Lynn Gibson is the 1995 salutatorian.

Wednesday, May 25, 2005 The Fleming-Neon City Council has learned that Lester Brothers Coal of Big Rock, Va., intends to begin surface mining operations in city limits by September. The mining operations will take place on the ridge running behind homes in the Fleming area.

. Former students of the Dunham High Colored School will travel to Letcher County to tour the hollows students grew up in the McRoberts, Fleming, Haymond, Kona and Jenkins area. Alumni will meet in Lexington first to reminisce about school days. Dunham High School closed in 1965 when the Kentucky schools were integrated.

. Seedtime on the Cumberland, an annual arts, crafts and multimedia celebration of Appalachia, will be held June 3 and 4 at the Appalshop in Whitesburg.