‘No one else could have played Loretta’s daddy’ 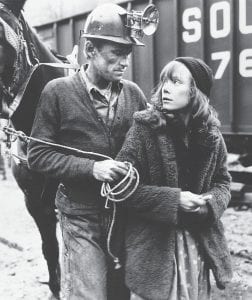 A PART OF OUR HISTORY — Levon Helm (left), a highly-acclaimed musician who died of cancer last week at age 71, spent a considerable amount of time in Letcher County in the late 1970’s filming “Coal Miner’s Daughter,” the Loretta Lynn biographical movie in which Helm, drummer for The Band, starred as Ted Webb, the father of Mrs. Lynn, who was played by Academy Award-winning actress Sissy Spacek (right). Key parts of the movie were filmed in Blackey and at Webb Branch at Bottom Fork. Helm also performed Bill Monroe’s classic tune “Blue Moon of Kentucky” in the movie. (AP photo)

“Everything dies, baby, that’s a fact. But maybe everything that dies someday comes back.” — Bruce Springsteen in the song “Atlantic City,” taken to new heights when recorded with a mandolin intro by Levon Helm and The Band.

Levon Helm tried once to explain what a certain powerful American musical form was all about.

Basically, Levon said, you draw a radius from Memphis into Arkansas and over into Mississippi. You pick up Robert Johnson, Johnny Cash and Elvis Presley, your black blues and your white blues. Then the radius reaches down toward New Orleans to touch those distinctive jazz sounds. Then you bring the radius around into eastern Tennessee and up to the Virginia hills. You pick up the Carter family and mountain music and bluegrass and the Grand Ole Opry. Then you throw in some of that black gospel music and that white Scotch-Irish gospel music from Virginia down to Arkansas and Mississippi that everybody got pumped into their systems in church on Sunday mornings.

Then, Levon explained, you had yourself a stew for simmering and stirring. When the time was right, usually late at night for what sometimes got called the “midnight ramble,” you lifted the lid. “If it mixes well and if it dances,” then you have something, as Levon told a mostly uninitiated young film director, Martin Scorsese, in that highly acclaimed late-’70s documentary “The Last Waltz.” Scorsese asked: What do you call it? “Rock ‘n’ roll,” Levon said.

On April 19, the 71-year-old Helm — from the Phillips County, Arkansas hamlet called Turkey Scratch north of Marvell — died at a cancer center in Manhattan. He’d already had a bout of throat cancer that kept him from performing those distinctive vocals, the markers of “The Weight” and “The Night They Drove Old Dixie Down.” That left him to provide only that equally distinctive drumming. On this sad news, there are two powerful matters to be celebrated. One is Levon’s compelling personal story. The other, even richer, is his essence, which is absolute authenticity.

He fell in as a teenager with Ronnie Hawkins and the Hawks in Fayetteville, Arkansas in the ‘50s and wound up from that as the drummer for Bob Dylan. Then, in the volatile late ‘60s, these sidemen of Dylan went out on their own, calling themselves, simply and appropriately, The Band. They put out uncompromising and nofrills music that the critics extolled as pure and seminal. Then The Band broke up, an occasion for “The Last Waltz.” The documentary was supposed to be about The Band in its final concert. But Levon pretty much washed his hands of the project because so much of it was overdubbed. That brings us to the essence, the authenticity.

Levon fell out over the years with the other leader of The Band, guitarist Robbie Robertson. He didn’t think Robertson was authentic. He felt so strongly about it that he declined to attend the induction of The Band into the Rock and Roll Hall of Fame. He had so differed with Robertson in the making of The Last Waltz that he threatened to walk away if Robertson and Scorsese edited out Muddy Waters. You couldn’t tell the authentic story without Muddy Waters.

In recent years Levon nabbed Grammys for what they call “Americana” music. That’s a fancy word for the pure music of our heritage, our American musical roots, which Levon wholly represented and to which he was wholly devoted. Get a CD called Dirt Farmer and listen to “Wide River to Cross” and “The Mountain.” That’ll explain everything.

Levon did some motion-picture acting over the years. I never thought he was very good, except on one account: No one else, absolutely no one else, could have played Loretta Lynn’s daddy in “Coal Miner’s Daughter.”

In fact, here’s what you need to do some evening soon: Get yourself “Music from Big Pink,” the essential album of The Band. And “Dirt Farmer,” of course. Then you’ll need two DVDs, of “The Last Waltz” and “Coal Miner’s Daughter.”

Now you’re ready for your own “Midnight Ramble.”

John Brummett writes for the Arkansas Democrat-Gazette. This column was distributed by The Associated Press.