Levon Helm gets his voice back 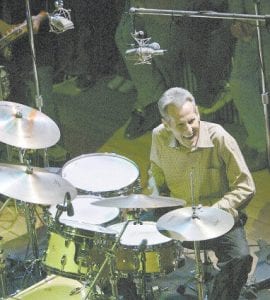 The voice is raspy but recognizable, reminiscent of a time when he played with a band so amazingly good they were simply known as The Band.

That was more than three decades ago, before the throat cancer and the surgery and the radiation left Levon Helm with no voice at all. The singer on classics like “Up On Cripple Creek” and “Rag Mama Rag” was resigned to resuming his musical life as strictly a sideman – a little drums, or strumming the mandolin.

“My dream was to have (daughter) Amy make an album, and I’d play some drums and still get to ride on the tour bus,” Helms says by phone from his home in Woodstock. “And then it finally got so I could sing harmony parts here and there, if the key was right, and the melody would accommodate it.”

It wasn’t until eight years after his cancer surgery, and after 28 radiation treatments, that Helm considered the possibility of singing on his own album. “Dirt Farmer” features his familiar voice on tracks like Steve Earle’s “The Mountain” and a variety of traditional tunes first heard on his boyhood back porch in Arkansas.

“My folks used to sing those songs to each other when they were kids,” Helm said of songs like “The Girl I Left Behind” and “The Blind Child.” The songs were passed down to the next generation, and Helm passed them along to his daughter, Amy.

The result, beginning with recording sessions that started in spring 2005, was Helm’s first solo studio album in 25 years. He dedicated “Dirt Farmer” to his parents, and started making the record as a collection of duets with his daughter.

At the same time, Helm was hosting his monthly “Midnight Ramble Sessions,” a concert series that brought in musical friends Donald Fagen, Elvis Costello, Allen Toussaint and Emmylou Harris to the barn on his property.

The shows helped pay his medical bills and cover reconstruction costs for his home studio, which was destroyed in a fire. Helm had built the studio and settled in Woodstock in 1975.

“The ‘Rambles’ started out mainly as a rent party kind of a deal,” Helm says. “All my friends getting together, playing a show, and paying the rent for me. But the ‘Rambles’ quickly turned into the best way in the world to try and get some chops back.”

As the sole proprietor of the venue, Helm was allowed to venture into more adventurous musical territory than if he’d gone on tour: “Some club owner saying, ‘You guys are great, but we need to hear more of the old stuff.”‘

The sessions led to the record, although it wasn’t easy going. Some days, Helm and the band assembled by one-time Bob Dylan guitarist Larry Campbell might go for hours. And other days, they might just go home early.

“You know, it just depended on energy levels,” Helm says. “Sometimes it would get real good, we’d get enthused, and give it a good honest day. Other times, when the voice started to go south, we’d pull back a little.”

The image of Helm pulling back remains incongruous compared to images of his driving drum work from “The Last Waltz,” or his eager vocals from any of The Band’s albums. Two of his old bandmates are now dead: Richard Manuel committed suicide, and Rick Danko died shortly after Helm’s cancer diagnosis.

The Band was inducted into the Rock and Roll Hall of Fame in 1994.

Helm, now 67, was so buoyed by making new music that he’s already looking forward to a follow up album.

Helm has an explanation for all the unexpected good news lately: “The power of prayer and music.”

And he’s hopeful of doing some live shows with the new album, something that seemed impossible when his voice disappeared.

“Well, it depends on the tickets, you know?” Helm says, his voice now self-deprecating. “If we can sell some of those tickets, I wouldn’t mind driving down to Philadelphia. But we haven’t made any plans yet.”