Lexington mayor to challenge Paul for seat in Senate 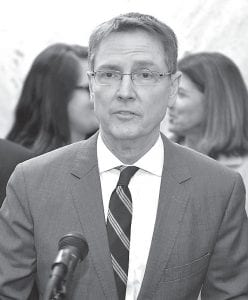 Lexington Mayor Jim Gray addressed reporters after filing to run for the U.S. Senate as a Democrat on Tuesday, declaring his candidacy to unseat Sen. Rand Paul, R-Ky., on the day of Kentucky’s filing deadline at the Kentucky State Capitol in Frankfort. (AP Photo)

Lexington Mayor Jim Gray filed to run for Rand Paul’s U.S. Senate seat this week, giving Paul a viable challenger and complicating his bid for re-election as he lags in the polls in his presidential campaign.

Gray, the wealthy former CEO of a construction company, made history in 2010 when he was elected Kentucky’s first openly gay mayor. Since then, he has wrangled the city’s pension funds and signed an ordinance raising the local minimum wage to $10.10 an hour.

But his candidacy comes at a time when Republicans have solidified their political power in Kentucky, holding all but one of the state’s congressional seats and four of the six statewide constitutional offices, including governor.

“There is no question that it’s a tough race,” Gray told The Associated Press in a phone interview. “But I think that the people in Kentucky are looking for an alternative.”

Kentucky Democrats have been in disarray since losing four of the state’s six statewide constitutional offices in November. The state party chairman resigned, and party leaders still not chosen a replacement.

But Gray gives Democrats a savvy political veteran who has shown a willingness to use his own money to fuel his campaigns. He used more than $800,000 of his own money in 2010 to topple an incumbent mayor, and gave himself another $250,000 in his 2014 re-election campaign.

Gray declined to take positions on several issues, deflecting a question about gun control by saying “We just launched today and I’m going to be addressing those issues as the campaign unfolds.” Instead, he focused on his record of “common-sense way of management,” including reforms to the city’s pension plans or police and firefighters that he says has saved the city $60 million in four years.

And despite Republican gains in Kentucky, Democrats still see Paul as vulnerable, given he is running for president at the same time asking Kentucky voters to re-elect him to the Senate.

“He’s spending so much of his time focused on presidential ambitions rather than focused on Kentucky and its issues. And we’ve got a lot of problems here,” Gray said.

Paul was in Washington on Tuesday and a spokeswoman said he was unavailable for comment.

Paul is the only major party presidential candidate who is running for two offices at the same time. He ran into a legal problem in Kentucky, where a state law forbids candidates from appearing on the ballot twice in the same election. Kentucky Republicans decided to hold a presidential caucus on March 5 to get around that, with Paul donating $250,000 to cover the causes’ expenses.

Paul has dropped in presidential polling, so much that he was bumped from the main stage of the latest televised debate in Iowa. But he has managed to make most of the votes in the U.S. Senate while keeping a busy campaign schedule, saying that shows his commitment to his job.

“As Senator Rand Paul prepares for re-election, he hopes voters will remember his tireless work to balance the budget, his fight against President Obama’s War on Coal, his fight against Obamacare, and that Senator Paul has returned to the taxpayer over $2 million from his office budget,” Paul adviser Doug Stafford said in a news release.

Minutes later, Stafford sent a fundraising email. But this time, it was for Paul’s presidential campaign.