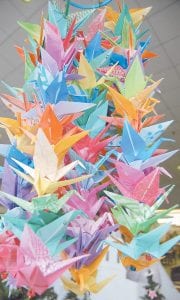 This round section contains 280 origami paper cranes folded by Mrs. Waddles and is on display at the Harry M. Caudill Memorial Library in Whitesburg. (Photos by Sally Barto)

A retired Whitesburg woman enjoyed making paper airplanes with her grandson so much that she decided to experiment with making other things with paper. After following basic instructions and reading a few books, Lorraine Waddles found a new hobby in origami, which is the Japanese art of paper folding.

“I just got hooked,” said Waddles, a former pediatric nurse who was born in Nova Scotia.

While arthritis has kept Waddles from quilting and making crafts, she says folding paper into intricate shapes keeps her swollen and sore hands from stiffening.

“It’s therapeutic for me,” she said.

When Waddles is sitting in a chair she is usually folding paper.

“ It just seemed to explode over the last three or four years ago when she found something her hands could do,” said her son, Omer Waddles, of Indianapolis, Ind.

Through trial and error, Mrs. Waddles has figured out which types of paper work best when making cranes, frogs, giraffes, flowers and other creations. 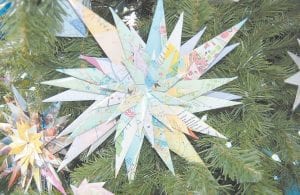 Mrs. Waddles folded this origami paper starburst with a map. Several pieces of origami made by her are on display at the Harry M. Caudill Memorial Library in Whitesburg. The starburst is Waddles’ own design.

She says origami paper is expensive and hard to find in eastern Kentucky, but that family members who live out of town do buy it for her. She mostly makes do with wrapping paper, maps, insides of envelopes and catalog pages. She prefers catalogs from the Lobster Gram seafood shop in Maine and Jackson & Perkins nursery in South Carolina for making her paper art.

“This is just stuff we throw away and I recycle it and use it,” she said.

Mrs. Waddles said her favorite part about origami is “seeing something beautiful coming out of something ordinarily you would throw away.”

“The oddest things you would never think of and she turns it into something beautiful,” said Omer Waddles.

Mrs. Waddles has folded more than 1,000 cranes, each of which takes about an hour to make. According to ancient Japanese legend, anyone who folds 1,000 origami paper cranes will be granted a wish by a crane. 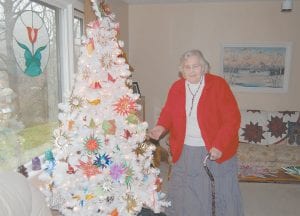 Lorraine Waddles, 80, of Whitesburg, posed for a photograph Tuesday morning in front of her Christmas tree, which she decorated with origami decorations.

“ The crane isn’t the easiest thing to make,” she said.

Mrs. Waddles has also created her own patterns of starbursts, which she says are her favorite to make. Her Christmas tree was decorated entirely with her origami creations.

Last year, Mrs. Waddles spent nine months folding origami decorations for the wedding of her granddaughter, Morgan Waddles Shroeder. Most of those decorations were made with origami paper and pages from finger painting books.

“My grandchildren have always been supportive of it,” she said.

Two of her six grandchildren attend the University of Kentucky and have their grandmother’s origami decorations displayed in their dorm rooms.

“The interest my family has in it keeps me going,” she said.

She credits her grandson, Tyler Waddles, now 20, with stirring the interest that led to origami when she taught him to make paper airplanes when he was three years old.

More than 700 of Mrs. Waddles’ origami cranes are on display at the Harry M. Caudill Memorial Library in Whitesburg as well as many of her starburst and flower decorations.