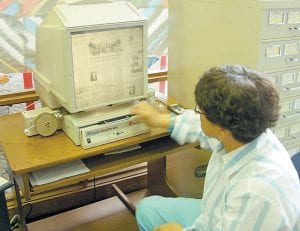 Lena Tidal, director of Letcher County Public Libraries, last week demonstrated how to use the new Microfilm ScanPro 400i. She said people will be able to email themselves images with the $4,000 machine. (Photo by Sally Barto)

Looking at old issues of magazines and newspapers on microfilm should be easier with a new microfilm machine the Harry M. Caudill Memorial Library recently purchased.

The new Microfilm ScanPro 400i prints from negative and positive film. In addition to microfilm, it can also read fiche.

Tidal said people will be able to email pages, but they are still learning about all of the capabilities of the new machine.

Tidal said the $4,000 machine was bought with a private donation.

The old microfilm machine was purchased in 1994 and has been used frequently.

“When we bought it, it was the best,” said Tidal.

She said you have to manipulate the focus to the older machine to be able to read the film.

Tidal said about four people used the old microfilm machine a day, but sometimes one person would spend an entire day looking at film.

“Some people just want to read what is going on,” said Tidal.

She said the microfilm machine comes in handy for those who want to look at old issues of newspapers that can’t be found in print anymore.

Genealogy census records from 1840-1870 and Letcher County marriage records from the 1800s are also kept on microfilm at the library.

“People come from all over the country to look at our genealogy records,” said Tidal. “They schedule their vacations around it.”

Tidal said in the past students have used the microfilm machine to look up what was going on in Letcher County when they were born.

She also said she has helped many people look up obituaries.