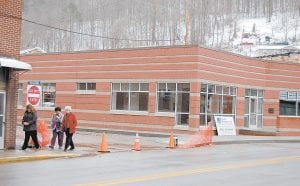 NEW LIBRARY ALMOST FINISHED — Jenay Hall, librarian of the Lillian Webb Memorial Library in Fleming-Neon, Letcher County Public Library District Director Angelina Tidal and Letcher County Library Board President Jeanette Ladd left the Fleming-Neon Public Library on March 26 after they checked the construction progress. One of the construction workers said painting on the inside walls will begin soon. A grand opening of the library is expected in mid-June. (Photo by Sally Barto)

The new Fleming-Neon Public Library will be “hip, modern and cool”, according to Bill Richardson, the architect who designed the $1 million project.

“It makes Neon look great,” said Richardson, a Whitesburg architect. “It matches up to the bank real nice.”

The 5,000-square-foot brick building, which is located on Main Street, has lots of large windows and open spaces. It will feature a young readers’ area to encourage teenagers and young adults to visit the library. A café, which was Letcher County Library Board President Jeanette Ladd’s idea, will be located adjacent to the young readers’ area.

“You can’t buy a cup of coffee in this town,” said Ladd.

Ladd expects the café to be popular because people want somewhere to meet after funerals or before Wednesday night church services.

A large community room, which can seat at least 30 people, can be closed off from the rest of the library so it can be used in the evenings. 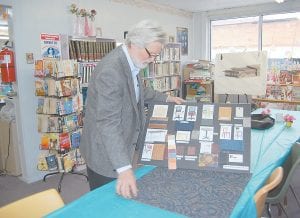 At left, architect Bill Richardson, who designed the new library building, looked at an interior design board created by Only Libraries Ltd.

“They don’t (now) have any community center where adults can exchange ideas,” said Angelina Tidal, director of the Letcher County Public Library District.

Ladd said the library will serve as a meeting place for the community to gather.

“It will be a place they can meet, visit and talk,” said Ladd, who said that eight small communities are located within miles of Fleming-Neon. “We definitely want the community to use it. We have a lot of people excited from 90 years old on down. They have been watching it go up brick by brick.”

Quilting, basket making, knitting and crocheting lessons can be held in the community room as well as book clubs. In addition to a children’s reading area, the new library will have free wi-fi and a charging station for people to bring their own laptops.

Fleming- Neon’s traditional school colors of purple and gold will be incorporated into the bright color scheme, she said.

“We tried to get things that would be interesting to teens’ eyes,” said Ladd. 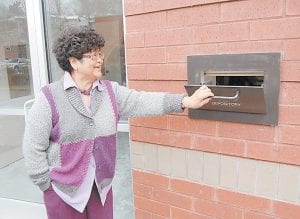 Chairs made of seatbelts will be found in the young readers’ area.

The building has two street-side entrances, including one near Fleming- Neon Elementary School. The main entrance will face Main Street and the backside of the building will face the school and Neon First Church of God. Windows from the Internet café will face Rescue Street.

The library board wants as many students as possible to use the new building.

“With our test scores being so low in the county, we hope this will put a punch in that,” said Ladd. “It’s an area that probably needs the services of a library more than any other area in Letcher County. You look around town and there’s not much to entertain children. We’re hoping the new library will solve some of these problems.”

The new library, which will be called the Fleming Neon Pubic Library, is expected to be finished by the end of April. Jenay Hall, who is the librarian of the Lillian Webb Memorial Library in Fleming-Neon, said books and other items will be moved from the old location to the new location in May. A grand opening is expected to be held in mid-June.

The new brick building is located where the old Hazen Department Store used to be on Main Street. The City of Fleming-Neon originally bought the Hazen building and had it demolished with plans to build a park there, but approved trading that piece of property with the library board for the current library building.

Ladd said the current Lillian Webb Memorial Library building is not safe for a large group of people and she and others on the library board have been trying for several years to find ways to have a new library in Fleming-Neon.

“Our floors are literally about to fall in at the main circulation area,” said Hall. “The ceiling is buckled. It doesn’t look safe.”

Hall said 20 to 30 children visit the library at “story time,” and that 50 to 70 people participate in the summer reading program. Forty just recently attended the March movie night.

“There is not enough space for any type of programming we would like to have,” said Tidal.

With double the space at the new location, Hall predicts she will be able to offer a variety of new programs.

“I have authors calling wanting to do book signings,” said Hall. “Everybody is so excited.”

The existing library has six computers and children now wait in line outside the building to use them, Ladd said. The new library will have 10 computers if grants are available.

Tidal said Fleming-Neon residents need a place to obtain resources and books as well as have access to computers to make their lives better. She said people can fill out applications for jobs and unemployment benefits online.

Ladd hopes the library is the beginning of a revitalization of the town.

“You have people who care about the community and want to bring it alive,” she said.

“It’s got me so excited,” said Tidal. “It is just beautiful. The possibilities of that building are endless.”

Funding includes $100,000 in coal severance money and Ladd said the library board has been saving money for this project as well as applying for grants.

Members of the library board are Ladd, Margaret Lewis, Jo Combs, Mahala Frazier and Carl Banks.