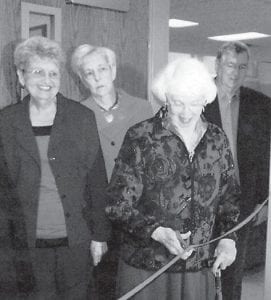 On Oct. 27, former Letcher County resident Anne Caudill was honored for her outstanding contribution to the Letcher County Public Library system. A multipurpose room at the Harry M. Caudill Library in Whitesburg was dedicated in her honor and named The Anne Caudill Community Room. Renovations to the room were made possible by a $55,000 donation to the library from Caudill.

Anne Caudill with her late husband, Harry, and the Whitesburg Woman’s Club are credited with the establishment of the first public library in Whitesburg in the early 1960s. Their persistence got the fiscal court’s approval for a library, and in 1964 a library opened in the basement of the courthouse.

The permanent site the Harry M. Caudill Memorial Library on Main Street in Whitesburg, was built in 1994 with grants from the Kentucky Department for Libraries and Archives, a Community Development Block Fund grant, and funds from the E.O. Robinson Mountain Fund, Letcher County Fiscal Court, James G. Hobbs, and the Caudills’ friends, Mary and Barry Bingham and Charles Kuralt.

Caudill’s other passions — literacy, family histories, and eastern Kentucky history — initiated the founding of the Letcher County Genealogy and Historical Society and the library’s genealogical collection. Her relocation to Indiana did not diminish her interest in the library. She continues to support the library’s activities by donating money and materials.

“She is our most consistent and second biggest benefactor,” says Lina Tidal, director of the library system. “Her contributions have enabled us to buy equipment like the microfilm reader, a copier, computers, furniture, on-line databases, Kentucky and reference books. I can go on and on. The county is very fortunate to have this generous lady in our midst. Her gifts are precious, especially during these times of economic difficulties.”

The event at the library was attended by members of the Daughters of the American Revolution, Whitesburg Garden Club, Whitesburg Woman’s Club, Letcher County Historical and Genealogical Society, past and present library board members, and friends of Anne Caudill. Letcher County Judge/Executive Jim Ward read a proclamation in her honor for her role in the promotion of literacy, reading books, and libraries.