Life in an Army hospital during World War II 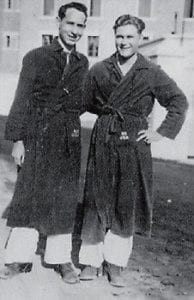 RECUPERATING – H.D. Caudill (left) and a friend are pictured at an Army hospital in Marseilles, France in May 1945.

In recent years it seems Army and Veterans hospitals have constantly been in the news. I have never spent any time in a Veterans Hospital as a patient, but I did spend more than seven months in Army hospitals after I was wounded in February 1945 during World War II.

At that time we had been at war for several years and for most of my stay we were still at war. The hospital where I spent most of my time in France was formerly a French cavalry post which had been taken over by the Americans and converted into a hospital for injured or sick Allied soldiers. Nothing about it was perfect, but it was so much nicer than what I had been used to on the front line.

When I first arrived at the hospital in Marseilles I was given a pair of pajamas and a robe which was not “government issue.” They looked like they had been purchased at a yard sale or donated by someone. Still, we did not complain.

As the wounded kept coming in, those with life-threatening injuries were taken care of as soon as possible. I had to go back to get a cheekbone (which was shattered by shrapnel when I was wounded) taken care of a second time. Some dental work which was done at the hospital in France had to be redone some years later at the Veterans Administration’s expense. Some 10 years later a piece of the land mine was discovered to be still in my foot. I still don’t remember complaining much because, after all, we had won a war of survival and had come back alive.

I guess the one major complaint I would have is this: Our young lives were totally interrupted by this war of survival and we were expected to win this war, thus preserving our freedoms, but once this was done it seemed that sometimes our government wanted to get by as cheaply as possible when it came to treatment and medication for the disabled by not providing the higher-priced medication and not providing high-qualified personnel.

At the hospital in Marseilles we had many prisoners of war (POWs) who were working in the hospital mess hall, etc. Their range in age was about 15 to 16 to up to 50 years. Most of the prisoners were Germans, but we did have some Russians and others who had been captured by the Germans and forced to serve in non-combative positions before they were captured by us. Most of the young prisoners could speak English very well and at every opportunity they liked to play around.

For a while many of us were still dependent on wheelchairs and if we were in a ward with nice wide aisles (and the nurses had their backs turned), a couple of the POWs would grab a couple of us in wheelchairs and race down the aisle. If this activity happened to be spotted by a nurse, not only the POWs but the also the patients would get a good dressing down! The lectures didn’t help as at the next opportunity it would all happen again.

Many of the more experienced POWs were excellent cooks and could prepare a meal that was much superior to rations or what many of our mess sergeants could come up with.

Most of our nurses were considerably older than us and they nearly always portrayed the “older sister” or “mom” image. For those of us who were bedfast at one time or another, they would set a bottle of rubbing al- cohol on the space heaters to warm it up before giving us a rubdown.

Our nurses were very caring but firm. I well remember when one of the more mature and experienced nurses told me it was time for me to quit depending on my crutches. I tried every way I could think of to convince her there was no way I could live without my crutches, but she insisted I lay them aside and put my left hand and forearm on her right shoulder and walk along with her.

I thought to myself, “Old girl, when I make my first step, I will throw all of my weight onto your shoulder and break you down if possible.” However, she had experienced this before and was ready to flip me five or six feet down the aisle! I was given a cane and my crutches were put aside.

I believe that in most instances the Army doctors and nurses did all they could for us given the equipment they had. I am disappointed when I remember that while I was in the hospital for more than seven months, I can’t recall anything ever being done for us that would help us adjust to civilian life once we were discharged. Occasionally some kind of course would be offered, but they were mostly ones to help us pass the time.

I remember one I took where I earned a license to operate an Army movie projector. Sometimes they would offer craft classes where brass artillery shells would be used to make bracelets or other types of costume jewelry, which could be sent to someone as a souvenir.

During the late winter of 1945, Hitler was really hurting for new personnel to fill the ranks for those people he had lost in Russia and the two invasions of France. He was recruiting higher and lower because many of the prisoners who were brought to the hospitals were exceptionally young or too old to be in uniform. They were usually brought to the hospitals to be patched up or to work. Most of the young ones could speak English but the older ones seemed to have missed out on this part of Hitler’s desirable programs.

I am reminded of an older prisoner by the name of Fritz who smoked his pipe continuously and in spite of all our efforts to teach him some English, all we could ever get out of him when we asked him to speak English was “Fritz smokes the pipe.”

The food in the Army hospitals wasn’t too bad, but I believe the German prisoner cooks did more with it than many of their American counterparts.

A few times while we were in the hospitals in France, we would be entertained by USO groups. They would ride their unicycles all over the wards and in between the beds and never knock over a cup or anything.

I’m not sure if there were any overall guidelines as to how patients were to be treated, but judging from experience it seems every hospital made its own rules. As an example, I was wounded in February 1945 and was sent back to the States in May 1945. I was not assigned to any particular duties and was discharged in September 1945. My ammo carrier for my bazooka was severely wounded just before Christmas 1944, and was sent back to England and as soon as he was able he was transferred to an Army Airforce unit and assigned to permanent KP duty until he was discharged in December 1945. A holder of the Combat Infantry Badge and Purple Heart plus other decorations should never have been assigned to do some of the lowest duties in the Army.

While we were at the hospital in France we were not allowed to leave the grounds except for a little bit out the front gate where a Frenchman would set up his camera and equipment. A friend and I visited him one day and had a few pictures made. These were the only pictures I was able to send to my fiancee, Edna Whitaker.

When an infantry soldier was on the front, he was putting his life on the line every day. The only other option was to be killed or severely wounded. In either case you were lost to your outfit. You hated to leave the fighting to your buddies, but there was nothing else you could do but try to recover both body and mind and return to your loved ones.

This facility in Jackson was constructed and equipped for a hospital and was much more efficient than where we had been in Europe. To the best of my recollection, we had no air conditioning but the wards were wide and airy with screened-in porches about the same size of the wards. The porches were fairly cool in the evenings and most of us would gather there for card games or just to talk until bedtime about our plans or expectations for our future once we were reunited with our loved ones. My fiancee expected me home within a couple of days after she received my telegram from Boston, but it was more like 30 days before I was able to be given a short furlough.

The hospitals I was assigned to in the States usually had a couple of private rooms near the entrance from the hallways. In most instances these rooms were assigned to the more severely injured and if they were married, their wives were allowed to visit with them behind closed doors. It always seemed some prankster would hang a very suggestive sign on their door which usually brought a smile or a chuckle from the other patients.

One of the old Army policies I seem to remember from training is “If you can’t hide it, paint it.” I am referring to the beautiful wide hallways in the hospital. They had to be constantly waxed to a high gloss. They were beautiful but were a real booby trap for the fellows still on crutches. Nevertheless, they were still receiving their weekly polish job when I left Jackson in August 1945.

The hospital at Jackson was sort of out in the country a bit and those of us who were well enough to go into town for a few hours were given a pass. We were not allowed to keep our uniforms in the ward but they were kept at a central supply room. When we were issued a pass, we would go to the supply room and turn in our pajamas, robe, etc., and would be given our complete dress uniform and any other items it was thought desirable to have on a pass. On our return, we would reverse the process.

There was a lot of surgery done in the Army hospitals and a couple of times it was experience that I was informed I was a surgery patient just before time for the surgery to be done. I suppose that since we were G.I. (Government Issue) they had the right to cut whenever they wanted.

Thinking back now some 60 years since I was a patient in an Army hospital, I can’t remember seeing a gloomy bunch of patients unless there had been a death among us. There were patients in most of the wards who had lost limbs, sight, hearing, or were otherwise handicapped from war injuries and even though we had fallen in battle, with the help of good medical people, our loved ones and the good Lord, we were going home alive. We had helped save the world and preserve our freedoms, which we have enjoyed for more than 60 years in spite of the actions of several rogue nations.