Life is still good without appendix 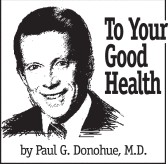 DEAR DR. DONOHUE: My 13-year-old son went to band camp for five days. On day three, he had terrific stomach pain and started to vomit. The instructors were alarmed and took him to the local hospital, where doctors diagnosed appendicitis. We had to give phone permission for him to have an operation. He recovered quickly.

My wife and I have a few questions. Could he have eaten something that caused appendicitis? What does not having an appendix do to people? No one in my wife’s or my family has had such an operation. We’re ignorant about all this. — G.G.

ANSWER: The appendix dangles from the first part of the colon in the lowerright side of the abdomen. It looks like a slender worm, and has an average length of 3 inches (8 cm). The function of the appendix isn’t clearly defined, but it might have a role in body immunity. Life without an appendix goes on as normally as life with one.

The appendix has a hollow core, which is lined with lymphoid tissue, the same kind of tissue found in lymph nodes. Bacteria from the colon can invade the hollow core and cause the lymph tissue to swell. Swelling cuts off blood supply, and the appendix begins to disintegrate — appendicitis. Undigested food or hard fecal material also can block the appendix’s core and lead to the same situation.

Nothing your son ate is likely the cause. All the other campers ate the same food as he, but he was the only one to develop this problem.

The pain of appendicitis most often starts in the area of the navel (bellybutton) and works its way toward the lower-right corner of the abdomen. Temperature rises. Vomiting is common, and sometimes diarrhea is part of the picture. Millions of people worldwide live without an appendix. They do quite well. So will your son.

DEAR DR. DONOHUE: You printed two letters on headaches. I don’t see you mention the medicine that works for me — Excedrin. It takes only half a pill to end my headaches. My grown son has tried it, but he didn’t get good results. Just wanted you to know how well it works for me. — J.R.

ANSWER: Thanks. Excedrin is a combination of aspirin and acetaminophen (Tylenol).