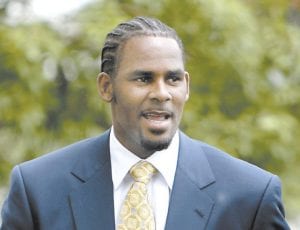 This June 2008 file photo shows R&B singer R. Kelly arriving at the Cook County Criminal Court Building in Chicago. The documentary series “Surviving R. Kelly” has given the sexual misconduct charges against the R&B star a level of attention beyond what they’ve had before. It’s also given Lifetime a hit at a time the cable network — or any cable entertainment network — can really use one. Lifetime’s nightly audience is less than half what it was a decade before, but more than 25 million people have seen some of the six-part documentary since it debuted in early January. (AP Photo)

Beyond ratings, the surest sign to executive Brie Miranda Bryant that Lifetime’s “Surviving R. Kelly” had connected as a television event is when she started getting pitches for similar “Surviving” documentary series.

Imitation is how television flatters. Bryant, Lifetime’s head of unscripted development, hasn’t bitten yet. But the rare and welcome hit gives Lifetime the chance to savor a success as it celebrates its 35th anniversary as a network and mulls whether lessons learned from the project can offer a way forward.

“I don’t think anyone expected the results that it would have, that it would be the catalyst for a larger conversation that it became,” she said.

An estimated 25.8 million people have seen all or some of the six-part documentary series that brings together dozens of people who accuse the singer of sexual misconduct, primarily contact with underage girls, since the first episode aired on January 3, the Nielsen company said. Each individual episode was seen by an average of 3.5 million people within three days of its premiere — big numbers for a cable program.

The series has led to new investigations and multiple reports that Kelly’s recording company, Sony Music, dropped him. While sexual abuse allegations against the multiplatinum singer, songwriter and producer are not new — he was acquitted of child pornography charges in 2008 — the series drew fresh scrutiny to the accusations and sparked new attention from authorities.

Kelly’s lawyers have denied the allegations and threatened legal action, but haven’t filed anything.

When Lifetime gave the goahead to the project by the team of Kreativ Inc and Bunim/Murray Productions, it was envisioned as a 60- or 90-minute documentary, Bryant said. Lifetime executives debated hard about spending the money at a time only two or three survivors and two sets of parents looking for their daughters had agreed to participate.

Yet producers benefited from the #MeToo movement, both in terms of eventual audience interest and the flood of other accusers. There were eventually 54 interview subjects with material so compelling the project ballooned to six parts.

“Things were swirling at a lowgrade fever for many years,” said Rob Sharenow, programming president for the A&E Networks, which owns Lifetime. “For a lot of people, this was the first time that the voices were aggregated. It really validated the issue by putting it on a larger platform.”

The documentary blurred gender and racial lines, as women and men were talking about it, as were blacks and whites, Bryant said.

These days, it’s hard to exaggerate the impact of a success like “Surviving R. Kelly” on Lifetime, or any cable network. In 2008, Lifetime averaged 1.5 million viewers on weekday evenings and, by 2008, that number had slipped to 700,000, the Nielsen company said. The trajectory is not unusual for cable entertainment networks, which face competition from streaming services and an abundance of programming options that were not around a decade ago.

There are no immediate plans to follow-up “Surviving R. Kelly,” although Lifetime is keeping its eye on the story, nor is it necessarily a template for any change in the network’s direction, the executives said.

“When I look at the other entertainment brands, it’s not as if their viewers expect them to stand up for them in any way, shape or form,” Sharenow said. “They’re just showing them cartoons or reruns of old sitcoms.”

And no, he won’t name names.

Still, he said, “Lifetime is not going to turn into CNN. That’s not who we are and not who we will be. I think Lifetime plays a different role for our viewers. Lifetime is a trusted friend and I think there is a little bit of sexism, frankly, when people look at Lifetime, and particularly Lifetime movies, because they are for women. These movies that women consume and enjoy are wonderful. These are movies that women love and we are happy to provide that for them.”

Among the new movies Lifetime is premiering are a remake of “Death of a Cheerleader,” which started airing on Saturday, “My Father’s Daughter: Victoria Gotti,” produced and narrated by the mobster’s daughter on Feb. 9, and a biopic on Olivia Newton John on Feb. 16.

Next week Lifetime is also trying something new with a live wedding special.

“If we can do more, we’ll figure that out,” Bryant said. “This was really an exploration of power in general and we’re talking about other places where we should be mining.”