Light turnout seen for vote that could affect many here 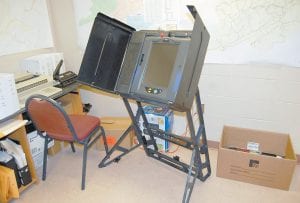 LIGHT TURNOUT EXPECTED — A voting machine for Letcher County residents who can’t make it to their voting precinct has been little used in the days leading up to next Tuesday’s general election. While the races for governor and other statewide constitutional offices are on the ballot, a very low voter turnout is expected here, said Letcher County Clerk Winston Meade. Citing a lack of local races and voter apathy, Meade said, “Most of your dedicated voters aren’t here anymore and younger voters don’t care.” (Photo by Sally Barto)

“I’d say this will be the lowest voter turnout since I have been here,” said Meade, who has held the office of county clerk for 17 years.

Meanwhile, one candidate’s wonkiness and the other’s confrontational personality, and their stark differences on some issues, have culminated in a virtual tossup in the November 3 election for governor.

Democrat Jack Conway and Republican Matt Bevin differ greatly in their stances on the race’s hottest issues, including the state’s crumbling pension system, the Medicaid expansion under federal health reform and the state’s education system, which makes up more than half the state budget. 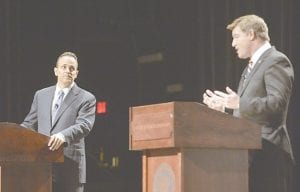 Regarding the underfunded pension system, Bevin touts his experience as a businessman, managing pensions and making payroll.

He has advocated moving new state workers to a 401(k) style system and offering current workers the opportunity to join the system, which the legislature recently changed to save money.

Bevin said during Monday’s KET debate, “We’re not really solving the problem at all,” partly because the estimated rate of return on investments is too optimistic.

Conway has said implementing such a system would actually cost the state $8 billion more in the first 15 years, since new hires are helping to pay current benefits. He has more or less advocated keeping the revised system in place, saying the state can meet its immediate obligations because it has a $219 million surplus.

“I think we can make it. I think that’s manageable,” Conway said in the debate.

Conway has said that moving teachers to a 401(k) style system would be “absolutely off the table” because they do not participate in Social Security, which would be their safety net should the 401(k) investments fall short. Bevin has said he would apply for a waiver to let teachers participate in Social Security without the state and schools making the employer match.

On the Medicaid expansion, which has extended health coverage to about 400,000 Kentuckians, Conway favors keeping it, as well as sustaining Kynect, the state’s health-insurance market that has about 100,000 Kentuckians in private plans. Bevin wants to abolish Kynect and use the federal exchange.

Bevin said in February he would immediately reverse the Medicaid expansion upon taking office, but later denied saying that. Since July he has said he would seek a federal waiver to convert to a system like Indiana’s, where Medicaid beneficiaries pay higher premiums to receive better benefits, as well as copayments.

“I don’t care if it’s a dollar or two dollars,” Bevin said in the KET debate. “People should have skin in the game.” Conway said in the debate that the Indiana program keeps people from getting coverage.

Bevin says the expansion is not sustainable, but Conway cites a state-funded study predicting that it will pay for itself by generating health-care jobs and tax revenue. He acknowledged during the debate that his administration would be challenged to prove that.

Conway has focused his campaign heavily on education, especially advocating more funding for early childhood education, citing research that shows 90 percent of brain development happens by age 5. He has also shown openness to restoring some of the funding cut from higher education.

Bevin has questioned the effectiveness of Head Start and called for tax vouchers to support private education, which Conway opposes. Bevin says he would use “outcomes based funding” to encourage more graduates in science, technol- ogy, engineering and math. Conway said on Monday’s debate that he would consider such an approach but wants a “level playing field” for universities.

Both candidates have touted their ability to improve the state’s economy, albeit through different methods.

Bevin says that the pension system is the top economic priority and calls for making Kentucky a right-to-work state because states that border Kentucky have the law that bans requirements to pay union dues or fees.

“I’m the only one sitting here who’s ever created a job,” the Louisville businessman said in the KET debate and on numerous other occasions.

Conway has noted that he is the only candidate who has run a government agency, and accused Bevin of not knowing how government works.

Television commercials supporting Conway have used many of the largely disproven attacks on Bevin that U.S. Sen. Mitch McConnell used to beat him in last year’s Senate primary. In debates, Bevin has repeatedly accused Conway of lying about him.

In the last few days Bevin has increased his effort to associate Conway with President Obama, who is unpopular in the state. Conway has noted that he was the only Democratic attorney general to sue the Obama administration for its anti-coal regulations.

Cheyene Miller of London is a journalism senior at the University of Kentucky. He wrote this story for Covering the Governor’s Race, a course taught by Associate Professor Al Cross and Journalist-in-Residence John Winn Miller.