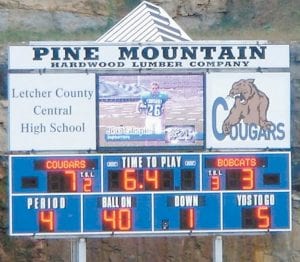 This screenshot taken from a website sponsored by a company that installs video scoreboards shows the Letcher County Central High School board when it was in fully operational condition. The board is down since being struck by lightning.

The large video screen at Letcher County Central High School’s football field is stuck in the “stop” mode, and the company that makes parts needed to repair the JumboTronstyle device has gone out of business.

Lightning recently struck the video screen, which was installed in 2005 and paid for with a private donation of $150,000.

Letcher District Technology Director Randy Bailey told the Letcher County Board of Education during its August meeting Monday night that he is waiting to hear from a representative of another company he has contacted.

“We’ve really got to get that fixed because we have already sold our ads and all that,” said Board Chairman Will Smith.

Assistant Supt. Twyla Messer told Smith that staff members are trying to come up with an alternative plan if the video screen isn’t fixed before game time Friday night.

In other business, Messer told the board that the district purchased a new intercom system for Letcher Middle School. Messer said LMS Principal Rick Warf was unable to communicate with teachers via the old intercom system.

“That is very good news for our school district and I hope we are able maintain that throughout the year,” said Cornett. “In comparison to 10 years ago, we are now 180 students less. We seem to be leveling off for the most part and not losing as many as we anticipated.”

The district attendance rate has leveled off in the last five years and Cornett said new ways to improve attendance are needed.

“That is a realistic, doable goal to meet that state average rate or exceed that rate,” said Cornett.

A meeting with principals, school counselors and Family Resource and Youth Services Center (FRYSC) coordinators was to be held Aug. 26 to determine additional things the district could do to improve attendance.

“ There are probably some new ideas and things that we haven’t done that we need to start trying and we need to talk about,” said Cornett.

Smith said raising the attendance rate is a big challenge.

Letcher Schools Supt. Tony Sergent said if the district improved its attendance rate by two percent, it would generate approximately $240,000 in funding.

“ It’s just a way to get more money if you can raise your attendance rate, not to mention the fact that students are in the classroom learning,” said Sergent.

Without going into much detail, Sergent said some strategies aimed at increasing attendance would make for tough decisions for the board.

“I think the board is willing to make tough decisions to keep kids in school,” said Sergent.

Board Member Dr. Sam Quillen Jr. said students can’t ever make up what is taught when they miss school.

“We just have to somehow get these parents to understand that it is not alright just to hold their kid out to go shopping or go eat at McDonald’s or something,” said Quillen.

The board appointed Board Member Mendy Boggs to be the board representative on the local planning committee.

A motion was made at 7:30 p.m. to go into a closed session to discuss an individual employee and litigation. The board came out of executive session at 8:23 p.m. Smith reported that no action was taken while behind closed doors.

The next regular board meeting will begin at 6:30 p. m. on Sept. 22 at the Letcher County School Bus Garage.