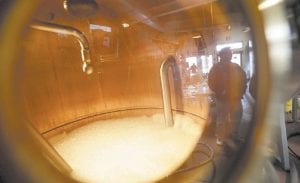 Above: A batch of Dry Fly whiskey being boiled at the distillery’s headquarters in Spokane, Wash. Dry Fly whose gin, vodka and whiskey are garnering national awards, is one of a growing trend of upstart small commercial distilleries across the United States. Below: Volunteers bottling Dry Fly gin at the distillery’s headquarters in Spokane, Wash. Ten volunteers come to Dry Fly once a week to bottle the spirits and the waiting list stretches for a year. (AP Photos/Rajah Bose)

If your liquor cabinet contains mostly familiar names like Chivas Regal, Jack Daniel’s or Smirnoff, get ready to make some new acquaintances.

Small-scale distilleries making high-quality whiskey, gin, vodka and other spirits are taking off across the country.

Boutique booze — formally called artisanal spirits — is a big trend in the bar business. Just as the market for craft beers and wines boomed during the past two decades, the audience has similarly grown for small-scale booze that is high quality and often higher priced.

“Why is this better? Because it’s not produced for 10 million people; it’s produced for 5,000 people,” says Bill Owens of the American Distilling Institute.

He estimates the number of small distilleries at just over 200, and growing by about 20 to 30 a year. They have sprouted up in more than three dozen states in recent years, with Oregon, California, Colorado, Michigan and New York the main players. 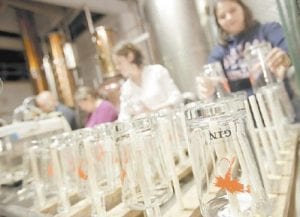 The gourmeting of hard liquor taps into the current trend of eating and drinking small, local and artisanal foods and beverages. It’s also being driven by “mixologists,” a growing class of high-profile bartenders who craft trendy drinks with specialty alcohol.

And it hasn’t hurt that Americans have grown enamored with the harddrinking characters on the trendsetting AMC television series “Mad Men,” Owens says.

But demand alone doesn’t explain the growth. The repeal of Prohibitionera laws in many states helped spur the rush.

Many states also have relaxed blue laws, or prohibition on Sunday liquor sales.

But he predicts that just as small-scale beers and wines did, micro-distilleries will cut into the market.

Among the big players in this little field are Anchor Distilling in San Francisco, a branch of the Anchor Brewing Company, as well as Hanger One in Alameda, Calif., and Iowa’s Templeton Rye.

Prices for these beverages trend toward the top shelf. Dry Fly Distilling of Spokane, for instance, sells 750-milliliter bottles of its vodka for $29.95 and its whiskey for $42 per bottle.

Washington, where wineries have boomed during the past two decades, is a relatively new player.

The micro-distilling business took off here after a 2008 change in state laws that allowed booze makers to serve samples to customers and directly sell 2 liters of take-home spirits per customer per day.

Before, all sales had to occur in state liquor stores. As a result, Washington has five small distilleries and 13 more awaiting licenses.

Dry Fly Distilling, whose high-quality gin, vodka and whiskey are garnering national awards, is based in a modest facility just east of downtown Spokane. The production room is dominated by stainless steel tanks, copper distilling equipment — including a tower that rises three stories in the air — and a wall of oak barrels marked “whiskey.” Cases of finished booze are stacked everywhere.

“We sell out everything we make,” says Kent Fleischmann, who with partner Don Poff enroth started the state’s first distillery in 2007.

In this case, selling out translated to $2 million in sales last year.

Fleischmann says the key to a successful small distillery is an emphasis on quality.

Big distillers tend to keep every drop of alcohol produced, figuring it can be processed into something drinkable, he says. At Dry Fly and other small distilleries, they discard the foul stuff (which is a main cause of hangovers).

“We use it for cleaning,” Fleischmann says.

Dry Fly is a “grain to glass” operation, meaning they make their own alcohol from raw grain.

Many small companies buy neutral spirits in bulk, process them into finished liquor and slap their label on them, he says.

Production is a scene you wouldn’t see at a big company. Ten volunteers come in to bottle the spirits on weekends, and the waiting list to do this stretches for a year, Fleischmann says. There is no pay.

“We serve them lunch and let them sign the bottles,” he said.