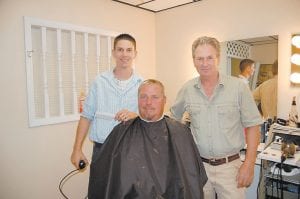 LIKE FATHER, LIKE SON — Thirty-year-old Kevin Brown (pictured at left) recently started working with his father, Richard Brown, who owns Cut-Away Barber and Beauty Salon. Richard Brown has been cutting hair in Whitesburg for 42 years. About 20 years ago, Richard Brown cut actor Ned Beatty’s hair for a week when he was in Letcher County filming at Appalshop. Cecil Sexton is pictured getting a haircut.