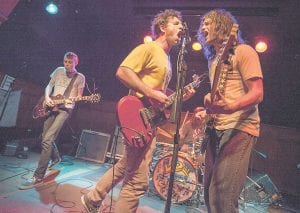 … is how Rolling Stone magazine recently described some of the music by the rock band Lee Bains III & The Glory Fires. The new band, which has toured with Alabama Shakes and Drive-by Truckers, will perform at Summit City in Whitesburg on Saturday, Nov. 9. “Between the twang in Bains’s voice, the twang in his guitars, and the plaintive howl of the melodies, this music is Southern by the grace of God,” writes Mark Deming in All Music Guide. “This is a country rocking, blues wailing, soul screaming message from the depths of the dirty South,” proclaims Steve Wilson in Reverberations. In the foreground of the photo above are Bains (left) and bassist Justin Colburn. At far left is guitarist Matt Wurtele. Admission to Saturday’s show is $12. (Photo by Barry Brecheisen)