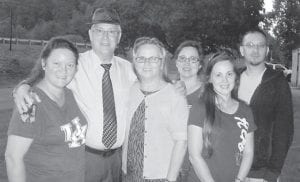 Carolyn Profitt of Isom is a breast cancer survivor. The members of her family say they count their blessings every day. After two years she is cancer free. Pictured are (left to right) daughter Janet Patrick, husband the Rev. Conard Profitt, Carolyn Profitt, daughter Debbie Burke, daughter Patty Profitt, and son Conard Profitt. She also has five grandchildren and a great-grandchild.

It has been a few weeks since I have sent any news from my little mountain area. I’ve been a little busy and haven’t tried to write. Hope all things are going great out in Eagle land.

The fall leaves have been so lovely here in these mountains. I’ve enjoyed seeing them change, and now they are falling and floating in the winds. I got up one morning and my yard and garden area were covered.

The weather was really cool for several days. Today has been so pretty and kind of warm, and I was sitting on the porch and saw the first ladybug crawling down the post. I was about to forget about them coming as the trees start shedding in October. I sure hope they aren’t real bad.

They sure are a nuisance when they get so thick in the air. You’re almost afraid to breathe, they fly in your face so bad.

I think they are good for getting rid of bean bugs every summer. They must live on the larvae of bean bugs. I have noticed the bugs aren’t eating the beans as bad as they used to before the ladybugs.

Well, since my last news I have had some good surprises. I was sitting here one day and someone came to the door and knocked. I went to see and, boy, was I surprised to see my dear friend Glenn Whitaker. I hadn’t seen him in about three years. His brother was with him and a nephew.

I was so glad to see and get to talk to him. He was a son of Jim Whitaker who used to live on Big Branch. They are the ones that used to walk across the mountain to come to our Kingdom Come Settlement School. His older brother and sister did also, and they became my good friends during the 1940s and taught school there too.

Venon, Ira, Evalee, Pauline, Renavae, Glenn and Arlie were my buddies. We used to love to square dance at school, pie suppers and parties.

I miss Arlie He died several years ago. I still remember how he loved K.C. and he always came to all the reunions we had. He sent me a little Valentine one year, and I still have it in my picture album.

Glenn told me his wife Eileen was not too well. She had had a stroke, but she was doing a lot better at that time. She always made the prettiest little Christmas cards to send out to me. I hope she will soon be completely well again.

Renavae is doing well and has a grandson who lives close to her. They have a baby and she loves to tend to it. They are a great family.

Another good day came for me two weeks ago. I was invited to attend the Lilley Cornett family reunion at Lilley Cornett Woods down on Linefork. There were a lot of the family members there and they had a Kentucky Chautauqua performer there to be Lilley Cornett. He was a good storyteller. I enjoyed his performance very much.

We drove out to an old, old cabin to listen to his life story — as much as he could tell — of what some of the family members had told him. There was a lot more to tell, but he didn’t know it all.

I was a young girl and remember a whole lot about Lilley Cornett.

David Hurt was the man who portrayed Lilley. He is a good storyteller.

I used to know Lilley. He traveled a lot up and down all of Linefork and bought calves and hogs for his trade. He was a hard bargainer in trading, but he did good and made a good living at that, and kept buying land with all the mineral rights still intact. He wouldn’t sell that to anyone.

I knew his sons Kelly, Carl, Dock and Fess, and his daughter Musette. His children had a lot of work to do as they grew up on a big farm.

Musette had a daughter, Lillian. She was at the reunion. I got to meet her after 65 or 66 years.

They had so much food cooked up I couldn’t believe it all. My two young granddaughters went with me. They enjoyed the day, but it started drizzling rain and turned real cold while we were eating dinner.

I got to see a lot of the Halcombs, Joe and Bill and their wives and their families. Lilley’s Dock married their sister Eula Mae and I met two of her sons, Jimmie and Van. They were all very nice and all were having a great day together.

The cabin is called the Chrisie Cabin after one of Lilley’s sisters. She lived in it back in early times. It only had one room and a large fireplace. Some of the rock in the chimney is really huge, and cut square. It’s a beautiful little place. Back in those days people didn’t need much, just a place to sleep and eat, because they had farms to work at and animals to take care of, hogs to feed, cows to milk, and chickens to feed. All of these were to use as food and drink. So most of their days were busy doing all the chores.

Lilley’s brothers lived close by. Edd lived on Chestnut Hill above Lilley. He ate with them a lot because Susan was the best cook of all. She was my cousin. Fannie Cornett married their son Coolidge Cornett. He had several brothers and sisters.

Susan was a real good mother-in-law to Fannie and helped her to do a lot of good cooking. They were good people.

I finally got to go to the Leatherwood Civil War reenactment. I enjoyed it very much. The actors were good. The cannons were very loud and the guns were loud also. The most liked part to me was the pretty horses some of the soldiers rode. I got to pet one of them. All the ladies were dressed in period clothing.

My cousin’s daughter was one of them. She had made her dress and hat and she was beautiful. Her dress was so pretty. They named her Miss Lillie. Her name is Janet and she does that every year and makes all her clothes. They are always gorgeous.

She is an artist and does some beautiful paintings. She is the artist that painted the portrait on Annie’s Frugal Shop at Whitesburg, the fancy lady and her poodle at the Eiffel Tower in Paris, where Mrs. Campbell took her daughter one year. Annie is the daughter of Mr. and Mrs. Frank Campbell and she loves to play golf. She was famous on the Letcher County Central High School golf team two years ago.

Frank is my second cousin. His dad was my first cousin, Robert Campbell Sr., whom I lost this year. His mother is Betty (Duke) Campbell of Letcher. In his family also are Robbie and Cheryl Campbell, another brother Jessie Campbell, and a sister named Bonnie. I love them all deeply.

God bless all my loved ones and I pray for our great country to become a place of peace and joy and all these worries about our future will pass soon.

I got so many calls on my birthday last Wednesday that I was flying higher than the clouds. All my sons, Roger, David, Daniel, Don and Randy, and my dear brother Emory and wife Darlene Cornett of Sweetser, Ind., my two sisters Judith Disney and Georgia Brown of Cumberland, and Mavis Minnard — thanks to all. I appreciated my 84 years more because of you loving me.