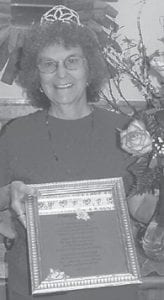 DAR PRINCESS — Shirley June Whitaker was named the Daughters of the American Revolution Pine Mountain Chapter Princess. She had been chapter regent for nine years and has served on DAR state committees.

Also there were squads from eastern Kentucky. North Laurel Junior High won first place in its division. Madison Reed is a member of that team. She is the granddaughter of Paul and Beverly Adams of Whitesburg. Linda was so proud of Madison and all the other Kentucky teams.

While there, they also visited Daytona Beach and Ft. Jackson, S.C.

Linda Lucas, Marilyn Banks and Carol Caudill all went to Pulaski County to the cabin for four days last week. While there they visited Verna and Chester Rayburn in Liberty. Chester has not been feeling well. The girls went to the Bread of Life Restaurant for lunch, and then went shopping.

Verna is making bracelets from buttons that are very pretty. She gave each one of the girls one as a gift.

The Daughters of the American Revolution met on Saturday, March 10, at Pine Mountain Grill to celebrate their Pine Mountain Chapter Princess. This year the outstanding chapter member was Shirley June Whitaker. Shirley had been chapter regent for nine years and has served on state committees. Following lunch there was discussion of the state convention to be held in Lexington March 29-April 1. Those present for the meeting were Marsha Banks, Shirley Whitaker, Patsy Nantz, Glenda Sexton, Nina Craft, Sally Caudill, Merlene Day, Mahala Frazier, Linda Lucas, Rebecca Reynolds and Vernell Mullins.

Cowan Homemakers had their March meeting at Ruth and Carrol Shackleford’s lovely home last week. Ruth donated a quilt top to be sent to the tornado victims in Laurel County. They met again last Friday at the community center to tack the quilt.

While shopping at Food City one day last week, I saw Doris A. Banks giving a tour of the store to a group of happy little children. She was doing a great job and seemed to be enjoying it as much as the kids.

We really appreciate the good citizens who did such a good job of cleaning up Little Cowan’s roadside. It makes a much nicer welcome to spring.