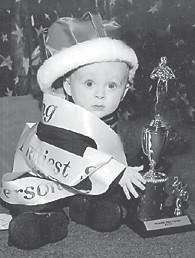 PAGEANT WINNER — Joe Don Pratt Jr. was crowned King of the Riverside Days Pageant on Aug. 9. He competed in the 6-12 months category. He was chosen for prettiest eyes, prettiest smile, and best personality, and received trophies as King and most photogenic. He won the Mountain Heritage Baby Pageant on Sept. 13 in the 7-12 months male category, and also was named most photogenic and received two trophies. He is the 10-month-old son of Joe and Marie Pratt of Craft’s Colly, and has two older sisters, Taylor, 10, and Trinity, 6. His grandparents are Rita Pratt and Goldie and Glenn Triplett, all of Jenkins, and John and Sharon Pratt of McRoberts. He is the greatgrandson of Anna Wyatt, also of Jenkins.

The Colson Center had a very busy week. Last Wednesday, we went to Whitesburg and enjoyed seeing all the diff erent tables on the street. Thanks to Whitaker Bank for the delicious food.

On Thursday, we went to Pikeville. What a good time we had. Linda Sturgill took all of Nora Logan’s luck. Linda won so many nice gifts. Nora says next trip Linda won’t be allowed to touch her for luck.

On Friday we had our old-fashioned country potluck dinner and a homemade pie contest. Special guests were Archie and Glenda Banks, and Joe Walker of McRoberts. Joe brought his special recipe Mexican cornbread to share with everyone. We were so pleased to have Morine Tolliver back with us

The pie contest was won by Linda Sturgill for her Turtle Cream Pie, but all the pies were definitely winners. Linda won dinner for two at Lee’s. 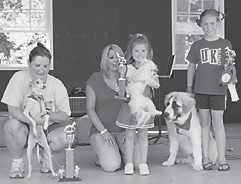 BEST IN SHOW — The winners of Best in Show at the Mountain Heritage Dog Show on Sept. 19 were (left to right) Thoven with Angela Mosley, first; Angel with Kylee Yonts, second; and Chocka with Bella Back, third.

Congratulations to Opal and all the seniors who participated, you are all winners!

Don’t forget the 20-mile yard sale Oct. 1-2. Colson Center will be having a hot dog dinner for $5 each. You can call it in or just come by. We will also have some items for sale. This is a great opportunity for you to find some great bargains and to visit with friends and make new friends.

Shirley Sexton is a person of vision; she is forever more doing something to help those in need so stop by and say ‘thank you’ to her. I hope the farmers have some produce for sale. I need some apples and potatoes.

A big thank you to Community Trust Bank for the birthday cake. We always enjoy the cake.

Happy anniversary to Jason and Tina Holbrook from your family, especially from Charlie and Wilma Holbrook and Clester and me. We love you guys so much.

John Sayers is trying to find pictures and some information on some of the Past Masters of the Lodge. If you can help him, give him a call at 633-4332. He needs help on Carl Lindsey, H.J. Welcker, S.J. Cornett, N.P. Banks, H.J. Blair and N.R. Day.

Brother Greeley Bates and his daughter, Geneva Walker, were in this weekend for his church Association meeting. They stopped by for a short visit on Friday evening. He wasn’t feeling very well, but he loves to come to the meetings when he can. Geneva and her aunt, Sarah Webb, will be coming back for a few days near the end of October.

Miss Brittany Brock and her grandmother, Lettie Hall, have been visiting with her brother, Brandon Brock, and Amy during the festival. They also visited with other family. I always enjoy seeing them. Debbie wasn’t feeling so well so she didn’t come. I hope she feels better soon.

I enjoyed Whitesburg Day. I sold books at the library and visited with friends. This is why the festivals are so important. We see people we know, or get to know, and that makes them special. Thank to Jim Cornett for the table. I met him for the first time and hope not the last.

I met a special couple from Ashland, Ore., Warren and Sarah Kincer Cornett Hagen. Sarah has written two books, and she is a gifted writer. She is originally from Letcher County, and she has two brothers and a sister living in Letcher County, G.C. and Richard Kincer and Willie Jo Hall. I hope she sold a lot of books at the festival.

Our Volume 7 Pictorials are a huge success, and we do have a few for sale at the Harry M. Caudill Memorial Library. Volume 8 will be out very soon.

Visiting family at Beaver Dam (Colson) were Reb and Fontella Hall. Fontella is the daughter of the late Noah and Belle Sturgill. She has three brothers living at Beaver Dam, and lots of cousins.

She and Reb stopped by Duke and Lou’s. Lou loves company, and right now she needs everyone’s prayers. I took her to Pikeville last week for her doctor’s appointment and we’re still waiting to see about the test results.

Hello to Hazel Tolliver. Shirley bought her a Pictorial, and I know she will enjoy it. We all love Hazel.

Maxine Quillen was seen riding a four-wheeler this week. It looks like we can’t keep her in line. She says she enjoys herself no matter what kind of wheels she’s on. She got a good report from her surgeon in Lexington: No cancer. Thank God!

Anna and Jonas have two children, Krystal and Hank, and two grandchildren. Little Jesse will miss his grandmother so much.

It was good to see Anna’s Aunt Odie Reynolds at the funeral. Anna was the daughter of Jesse and Ollie Hall Baker. She has many cousins on Millstone. Her sister Carol Sue Hall lives close to me. We love this family and will be praying for them.

Talked to Sabrina Kiser this week. She and many others want a marker for Daniel Bentley. Daniel is buried near Neon Junction and has many descendants in this area. It’s always a pleasure to talk to Sabrina. She says Eleanor Tolliver Waters isn’t doing very well.

Does anyone know exactly where the Farraday Post Office was located? I had a call from Von Tackett about the location. Hopefully someone will remember.

Sympathy to the family of David Sexton, formerly of Whitesburg, who drowned near his home in Indiana. David was the son of Sam Sexton and the grandson of Raymond and Florence Whitaker Sexton. His aunts, Darlene and Gaynell, went to Indiana for his funeral.

His aunt, Alpha Sexton, was unable to go. Alpha lives at Colson.

Be sure and remember the 20 Mile Yard Sale and our hot dog dinner. We will see you there.