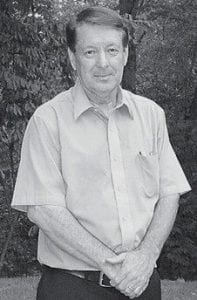 Jimmy Hall of Jenkins, recalls growing up in the 1940s and 1950s in McRoberts. He attended grade school and middle school there and graduated from Jenkins High School in 1957. As a kid he attended the McRoberts Old Regular Baptist Church with his parents, Wilburn Hall Sr. and Ilma Tackett Hall. He was intrigued with the chanting sound of line singing but sometimes grew restless when several guest preachers preached too long. After the services there was usually dinner on the ground or the congregation was invited to dinner at the homes of some of the parishioners. Sometimes the singing would start again after dinner. Many times the event lasted most of the day. Today the services are much shorter but it is still traditional to have dinner after church services.

The tradition of line singing is believed to have been a part of our culture since the 1600s. In the line singing art form the song leader reads or recites a line of a song then the choir and congregation sing. The lines are kept short and recited quickly so the singers do not lose any continuity with their singing.

Originally the concept was necessary because many of the congregation did not read and there may have been a shortage of songbooks. Today neither of these entities is a factor yet the tradition continues.

We have heard many stories about the choir singing the preacher down if he becomes too longwinded, and in some cases this may have been true. In other cases the singing may begin if the congregation feels the preacher is straying from the doctrine of the church or if it is getting close to dinner time.

In April, Jimmy Hall and members of various churches in the Indian Bottom Association of Old Regular Baptist Churches were invited to take part in the International Conference of Line Singing at Yale University. The event was sponsored by the Yale School of Music and the Duke Ellington Fellows Program.

Elwood Cornett, moderator of the Indian Bottom Association, organized the trip. The group of about 40 church members made the 17-hour trip by chartered bus. Yale University paid the travel expenses and accommodations for the three days and nights. The group was composed of men and women and had four performances led by various brothers. The event was held in Battell Chapel on the campus of Yale University. Many presidents of the United States had worshipped in the same chapel at various times in our history.

One group of line singers were African-Americans from the Sipsey River Primitive Baptist Association in Eutaw, Ala. Their presentation was called “African-American ‘Moaning’ in Prayer.” The group began in a low moaning prayer where each prayed individually. The prayer became louder and louder until the chant-like performance reached a crescendo in unison.

Another performance was by Native Americans from Clairmore, Okla. They represented the Hutchee Chippa Indian Baptist Church and sang in their native tongue. At various times each of the three groups sang the same song: “Guide me, O thou great Jehovah.” Even with the language difference one could still hear the recognizable melodies.

The conference consisted of various presentations of singing, devotions and lectures. One presentation by Katherine Smith, professor of York St. Johns University in York, Scotland, traced the history of line singing from the time of the Scottish missionaries in the American South in the 1600s.

Jimmy Hall recalls attending various denominations of churches as a young adult but eventually was led back to the church of his childhood. In 1976 he joined the Little Creek Old Regular Baptist Church in Pike County. He was baptized in the Levisa Fork of the Big Sandy River at the mouth of Little Creek. He recalls being baptized by Brothers Ruben Baker and Frank Hopkins. He took his membership to the Old Elkhorn Regular Baptist Church at Shelby Gap and was called to preach soon thereafter. He was ordained during his first year in the church. In 1980 he took his membership to the Hemphill Old Regular Baptist Church and became the moderator of the church. At that time the Hemphill church was in the Union Association. Jimmy says that in 1995 God led him to take his membership to the Big Cowan Church in the Indian Bottom Association. Later the Union Association became a part of the Indian Bottom Association and he again became moderator of the Hemphill Church. In 2005 Jimmy moved his Hemphill Church to Pikeville on Hambley Blvd. He named the church The Little Hannah Old Regular Baptist Church in honor of his grandmother, Hannah Tackett.

Through his career Jimmy has worked as a school teacher, coal miner, merchant, salesman and restaurateur. Today in semi-retirement he and his son Jamie operate a water filter business.

Jimmy and his congregation will perform line singing at the second annual Indian Summer Folk Festival at the Little Shepherd Amphitheatre in Jenkins. The festival is scheduled for October 5 through 7. The event will feature handmade arts and crafts, demonstrations, exhibits, ol’ time mountain music and mountain food. For additional information, call the Cumberland Mountain Arts and Crafts Council at 832- 1453, Bessie Shepherd at 633- 9123, or Ked Sanders at 832- 4122.