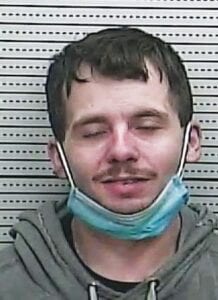 A Linefork man who had been sought on a charge of murder in connection with the disappearance another man in Cumberland has been arrested for murder and is being held in lieu of a $100,000 full cash bond.

Derrick Logan Polly is in the Harlan County Detention Center after being arrested January 13 at Linefork.

Polly, 30, of Cornetts Branch on Linefork, is one of four people charged in the murder of Wilmer Jose Perez, 21, who has been missing since he left work at Sazon Mexican Restaurant in Cumberland on April 1, 2020.

Polly’s older brother, Fess O’Neill Polly, 42, also of Cornetts Branch, was arrested December 18. Fess Polly was also charged with carrying a concealed deadly weapon for allegedly possessing brass knuckles at the time of his arrest. He was charged under a separate warrant for failure to appear in court to answer multiple traffic violations.

Derrick Polly is the last of the four to be arrested. Cumberland Police picked him up at 10:38 a.m. last Wednesday at Cornetts Branch.

According to police, Perez left work at the restaurant about 10:30 p.m. to make the 10-minute walk to his home. Security cameras in the area showed he passed up his home and kept walking.

Police have long suspected foul play in Perez’s disappearance. The investigating officer said in May that police had evidence and witnesses leading them to believe Perez had been murdered. Law enforcement sources said police believe Perez either met someone or was abducted and taken to an abandoned building in downtown Cumberland, tortured and then killed. Sources close to the investigation said police believe Perez’s body was dismembered and disposed of in Letcher County.

Police obtained a search warrant for a pond on a strip mine off KY 510 at Gilley last year, but apparently found no body. There has been no public announcement that Perez’s body has been located.

The warrant for Derrick Polly says during the time period of April 1, 2020, to April 3, 2020, in Harlan County, the four defendants “caused the death” of Perez, and then “destroyed, mutilated, concealed, removed or altered physical evidence of the crime.”