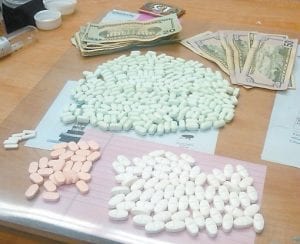 A Linefork woman arrested on drug trafficking charges is out of jail after posting a $10,000 cash bond.

According to court documents, police stopped a blue Chevrolet Blazer in which Halcomb was a passenger because an occupant wasn’t wearing a seat belt. Inside a pink purse police found “several pill containers which had partial labels containing a variety of controlled substances,” including oxycodone, hydrocodone and Xanax, and $394 in cash.

Police said 338 tablets were found inside Halcomb’s purse and that she admitted that some of the money found was obtained through the sale of controlled substances.

Arraignment for Halcomb is set for 11 a.m. on June 1 in Letcher District Court.

Lt. Brian Damron of the Letcher County Sheriff ’s Department has charge of the investigation.