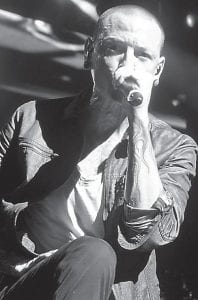 The Honda Civic Tour made its seventh stop of this year’s 15-date tour in Cincinnati Ohio’s Riverbend Music Center recently. The tour, in its 11th year, had an all star lineup featuring co-headliner’s Linkin Park and Incubus along with opening band MUTEMATH. With such great bands the amphitheater with a capacity of 20,500, was nearly full, even on a midweek show.

Opening the August were New Orleans natives MUTEMATH. The four-piece band walked onstage determined to give the fans a good show in the short 30-minute set they were given. After drummer Darren King secured his headphones with a roll of Duct tape (by wrapping the tape around his head several times) the fans knew that the group would deliver the high-energy show their full sets were known for.

Proving the fans’ predictions correct by playing their wellknown songs “Blood Pressure” and “Typical” and long jams like “Reset,” and never standing still. The active set included lead singer Paul Meany making several leaps from his piano onto the stage. Meany also brought out several uncommon electronic musical instruments, including the keytar and AxeSynth, which he leaped off the stage with and allowed fans to play. 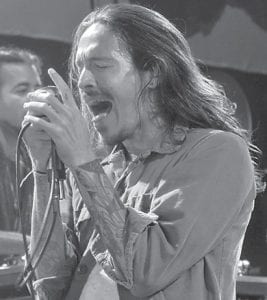 The second act to play was Incubus. Returning for their second appearance on the tour (the first was their headlining appearance in 2002) they provided the fans with nostalgia from Honda Civic tours of the past. These shows are some of the final shows in support of their latest album If Not Now, When? (2011). As the crowd awaited the band’s entrance, a five-minute countdown appeared on the screen, creating mass anticipation for not only the crowd but also the band. This was apparent when they entered the stage 20 seconds earlier than planned.

Incubus started their set off strong by playing songs like “Adolescents,” “Nice to Know You” and “Megalomaniac.” They then took the time to slow things down by playing a stunning version of “If Not Now, When?” and even a cover of Lionel Richie’s hit, “Hello.” This not only shocked the fans but also created an instant sing along.

After singing other songs, Incubus then wheeled a small wooden piano onto the stage accompanied with two wine glasses, a bottle of wine and candelabra and left the stage only to lead singer Brandon Boyd and guitarist Mike Einziger. Boyd then announced, “It’s not mine or Mike’s birthday, but we are still going to celebrate.” Boyd then served the wine to himself and Einziger, lit the candelabra and began to perform an acoustic version of their latest hit “Promises, Promises.” After finishing the song, the members reunited back onstage and finished their set with songs including “Drive,” “Pardon Me,” and “Tomorrow’s Food.”

The final act of the night was California nu-metal band Linkin Park. Greeted by monstrous applause as they entered the stage, the group’s rapper, Mike Shinoda, acknowledged the welcoming by saying, “Now we know why Incubus came back stage full of energy and happy. You guys are awesome!” This was followed by an even louder applause and when it finally died down the group began to play.

Fresh off hearing the news that their debut album Hybrid Theory (2000) had just gone 10 times platinum, the group played several song from it including “Papercut,” “With You,” and “Points Of Authority.” The six-piece band also played songs from all five of their albums, including “Numb,” “What I’ve Done,” “Waiting for the End,” and one from their new album, “Victimized.” All these resonated with the audience members who knew every word to even the newest songs. These new songs came from the album that they released earlier this summer (June 26), Living Things. Noted as one of their most powerful albums by Rolling Stone and with its signature Linkin Park sound, the album peaked at number one on Billboard’s Top 200 chart.

Though the band is known for their fast-paced hip hop beat and loud metal guitars, they took time to soften thing up. This would create one of the most heartwarming moments of the night when Shinoda along with lead singer Chester Bennington took the time to tell the story of a young man with terminal cancer. In this true story, the fan wished to see the band before he became too ill to do so. After receiving tickets to see the Honda Civic Tour at one of its last stops, in California, the man’s health took a turn for the worse and it looked like his final wish would be unfulfilled — that was until Bennington’s son heard the news and contacted his father.

After hearing the heartwrenching story the group played an intimate show for the fan at their rehearsal space. At this part in telling the story the crowd erupted in applause but was immediately quieted by Shinoda saying, “I appreciate your applause, but this isn’t about anything we did. I just wanted to give a shoutout to the kids that were involved and dedicate this song to him. This song is for Justin!” And with that the band played a mash up of “Leave Out All the Rest,” “Shadow of the Day,” and “Iridescent.”

After that mash up, the group played several more songs including “The Catalyst,” “Lost in The Echo,” and “One Step Closer.” They then left the stage, and as fans began to chant “Linkin Park” the band came back into view for an encore beginning with their latest single “Burn It Down.” During this song the band pulled out all the stops as advanced pyrotechnics doused the stage with fire while fireworks rained down. These pyrotechnics were present throughout the rest of the set while they played “In the End” and finished their set with a mash up of “Bleed It Out” and a surprise cover of The Beastie Boys’ “Sabotage.”

During the 21-song set that was compiled of the best of Linkin Park’s music catalogue, the one thing that was clear was that the group has never been afraid to branch out with every new album that comes. Linkin Park shocks you and makes you forget about any preconceived notions you previously had. The album cover to Living Things is of a man shattering a layer of white on his skin to reveal something new and different, black. This picture truly embodies Linkin Park, because they themselves have always broken the mold and created music on their own terms, leaving fans to adapt. But as the crowd proved while singing every one of the group’s dynamic range of songs, they will keep adapting because Bennington’s melodious hooks accompanied by Shinoda’s “in your face” refrains will sound good with any path the band chooses to take.

•“Waiting For The End” – Linkin Park

•“Shadow Of The Day” – Linkin Park