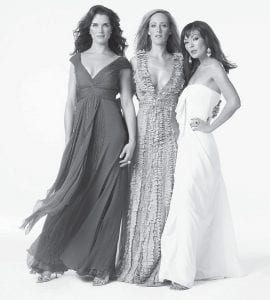 As titles go, these are lively, inviting and interchangeable – although “Lipstick Jungle” evokes the business world as a jungle tamed by women, which is pretty much the opposite message of the show (“Cashmere Mafia,” too).

But never mind all that.

From a creative standpoint, “Cashmere” (Wednesdays at 10 p.m. on ABC) comes across as strictly a synthetic blend. That was evident right away. On the other hand, its sister serial “Lipstick” (premieres Thursday, Feb. 7 at 10 p.m. on NBC) is glossy and bright. But is it clever enough to stay alive in the jungle of prime time?

See for yourself. The two series are disconcertingly similar. Take this test: Once you’ve got the titles straight, watch a couple of episodes of both shows, then try to remember which things happened on which series.

While “Cashmere” focuses on four hard-driving Manhattan career women (played by Lucy Liu, Frances O’Connor, Miranda Otto and Bonnie Somerville), “Lipstick” focuses on three hard-driving Manhattan career women (played by Brooke Shields, Kim Raver and Lindsay Price). On both shows, glam gals support one another in matters personal and professional, as each pursues the manifesto of Having It All.

Despite crammed schedules, they manage to find sufficient “we time” to confide and commiserate, often over wine or cocktails (which never seem to interfere with work).

What are their tony professions?

On “Lipstick,” it’s fashion design, movies – and running a magazine.

As yet another parallel, publishing bosses Lucy Liu and Kim Raver are each lorded over by someone who’s not just a man, he’s a pompous Brit. (Don’t any Yanks run media companies these days?)

But there are differences. “Cashmere” seems patently contrived, “Lipstick” not quite so contrived. The leading ladies of “Cashmere” are wound too tight, while the women on “Lipstick” seem to have more fun. And unlike the paint-by-numbers “Cashmere” foursome, the friendship on “Lipstick” is believable.

Consider how, after a business setback, designer Victory Ford (played by Price) gets a friendly pep talk.

Studio head Wendy (Shields) offers up her weekend house in the Hamptons, where the refrigerator waits, “stocked with Dove Bars and weed.”

No, argues Raver’s character, Nico, who tells Victory to stay and fight.

“When they smell fear in this town, it’s over,” Nico warns.

Well, the friendship is sort of believable.

Another way the shows differ: Adversaries to the heroines of “Cashmere” can be female, but each of them must clearly be branded as a slut. Whereas on “Lipstick,” Wendy and Victory have foes in the business world who just happen to be women.

Meanwhile, “Lipstick” takes a sassier approach to the gender war.

On “Cashmere,” hotel exec Juliet (Otto) has discovered her husband is having an affair with someone she knows. She threatens to repay him with revenge sex, vowing to have an affair of her own.

“If Davis can routinely have sex without consequences, why can’t I?” Juliet says to her friends.

“Because you’re a woman,” counsels the kinder, gentler Zoe (O’Connor).

Whatever the reason, when Juliet gets her golden opportunity, she can’t go through with it.

But on “Lipstick,” Raver’s character, Nico, proactively cheats on her bookish, academics focused husband of 17 years. She’s tired of how he neglects her, um, needs, and when a hunky younger man puts the moves on her, she can’t pass it up. Sure, she feels awful afterward. But not so awful she doesn’t do it again.

“I don’t know why we expect to get everything from one person,” she muses to her chums with no further explanation. Cue the margaritas.

If “Lipstick Jungle” has the edge on reflecting a female point of view, no wonder. It’s based on the novel of the same name by Candace Bushnell, who serves as an executive producer. Bushnell, of course, is the best-selling author of an earlier book that inspired the HBO hit “Sex and the City” – four smokin’ bachelorettes romping through a version of New York from the last century.

But the DNA of that series can also be detected in “Cashmere.” No surprise there, either. The creator of “Sex and the City,” Darren Star, is a “Cashmere” executive producer.

A few years ago he tried to develop “Lipstick Jungle” in partnership with Bushnell, before selling his own, conspicuously similar new show to ABC.

Sadly, both series are deficient. But if Bushnell and Star had stuck together, who knows? The show that resulted might have had it all.